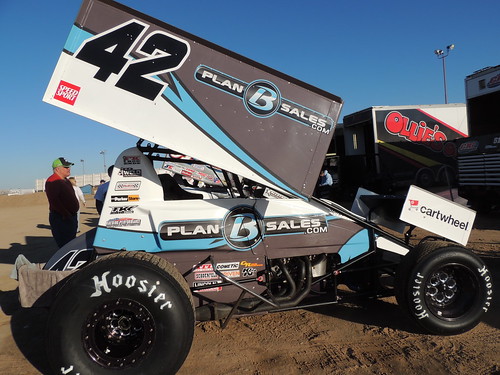 For those who did not attend the inaugural Winter Heat Sprint Car Showdown last January at the Cocopah Speedway, let me make one point, this is not your ordinary sprint car event!

According to the Cocopah Speedway director, Greg Burgess, the 2016 version of the five nights of sprint car racing will not resemble last year’s event.  Burgess opines that he fully expects to see five different winners celebrating victory this year, as was the case for last year’s inaugural event.

“I really think that that we will have five different winners once again.  The track surface is so racy and the drivers are so good,” said Burgess this week as the final preparations for the second annual event were being finalized.

“Our format allows everyone time to make adjustments to be better.  I may be wrong but I think we will see five different winners again.  And my guess is maybe only one of those five winners may be a repeat winner from last year.  I am not sure which one, but these guys are so, so good, and there will be more of them, so I’m saying only one.”

It appears that all five of last year’s winners have indicated that they will be on hand for this year’s event.

In 2015, Paul McMahan won the feature on the opening night of racing.  The second night of racing was won by the driver from Elk Grove, CA, Young Money, better known as Kyle Larson.  The King, Steve Kinser took his familiar #11 to the winner’s circle. Night number three went to The Dude, Danny Lasoski.  And the final night of racing was owned by a newcomer to 410 winged sprint car racing, Aaron Ruetzel.

The Dude won the overall points championship, stealing it away from the points leader Paul McMahan, who failed to make the feature in the final night of racing.

Meanwhile that newcomer, Reutzel, was leading each of the first two nights of racing when mechanical issues befell the young racer.  Absent those mechanical issues, Reutzel could have easily won three of the five races last year.

Likewise, Young Money was in a position to win a second feature when he experienced a tire failure late in the race.

As of the first of this week there were 48 sprint car teams and drivers pre-entered for this event, versus 34 teams for the 2015 race.  So this year’s show looks like it has a bigger driver turnout, and we know that Burgess will make the show much better than last year.