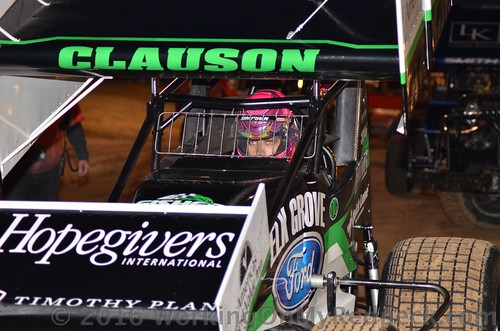 “This is truly one of the darkest days in the 60-year history of the United States Auto Club,” USAC CEO Kevin Miller said. “Not only have we lost one of our greatest USAC champions, we’ve lost a true ambassador for all of motor sports.”

Just after taking the lead on Saturday night, Clauson climbed a guard rail between Turns 3 and 4 and flipped “heavily” before being struck by a car driven by Ryan Greth, according to USAC’s Twitter account. The race continued after a red flag period and was won by Chad Boat.

Clauson ran in three Indianapolis 500 races – including this May for the 100th running, where he finished 23rd and led three laps – and had a brief NASCAR Xfinity Series career, but he was best known for his talent in the dirt racing world. He was a beloved driver who racked up wins at an impressive pace.

“Bryan’s passion for our sport was unparalleled,” Miller said. “He was a leader not only on the track, but in the pits with his fellow competitors.”

Clauson was planning to marry fiancée Lauren Stewart next February. The driver was popular among dirt racing fans; his dog, Chevy Clauson, has its own Twitter account with more than 4,000 followers.

I met Bryan this past January at the 2016 Winter Heat Sprint Car Showdown at Cocopah Speedway, an outstanding dirt track about 10 miles from my winter home in Yuma, AZ.  He had just gotten off of a plane from Australia where he had been winter sprint car racing.

Clauson was a very humble and likeable young man, eager to talk about his racing, and very excited to compete at Winter Heat among some of the most respected sprint car racers in the country.  He explained to me about his 2016 racing venture of 200 in 2016!  He was planning on racing 200 sprint car and midget races in 2016, included for 2016 was another attempt to race at the Indy 500.  When asked to gather his crew to pose for some photos he eagerly called to his guys to get around the sprint car for some “team photos”!

The midget and sprint car world, as well as the rest of the dirt track racers in the US, will truly miss this young USAC racing champion who left his mark on the sport, as well as leaving his mark on hi s competitors.  Bryan Clauson departed this world much too early!  My condolences to the Clauson family.

Go rest high on that mountain, Bryan Clauson, your work on this Earth is now all finished!

MAY YOU REST IN PEACE BC!

One Comment on “Go Rest High On The Mountain, Bryan Clauson!”