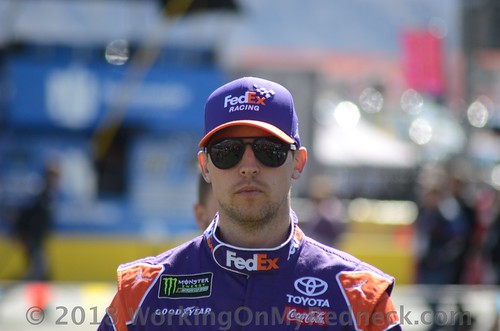 “The No. 1 pit stall (a perk for the pole winner) obviously is very important here, and I’m excited about that,” Hamlin said. “Really, the team has done a very good job with the car all weekend. So I’m optimistic, and I’m hopeful we have a good smooth race on Sunday and continue to build some momentum here over the next few weeks.”

The Busch Pole Award was Hamlin’s third in the last four races and the 29th of his career.

Larson ran the fastest laps of the afternoon in the first round, covering the distance in 27.908 seconds (176.208 mph). The driver of the No. 42 Chip Ganassi Racing Chevrolet was second fastest behind eventual fourth-place qualifier Alex Bowman in the second round before falling just short on his final lap.

“I just got a little too loose there in the center of (Turns) 1 and 2 and at the exit of 3 and 4, which I felt cost me a little bit of time,” Larson said. “I didn’t need much to get the pole. I felt like we had a better car than Denny throughout qualifying there.

“I just got a little too loose and messed up a little bit in 1 and 2.”

Showing encouraging speed during the first round Chevrolets took the top five positions in the first round with the Hendrick Motorsports quartet of Byron, Bowman, Elliott and seven-time champion Jimmie Johnson occupying positions two through five. Johnson, who will start 20th on Sunday, was the only Hendrick driver who did not advance past the second round.

“I was a little surprised,” Bowman said of his fourth-place run. “We mocked up (made a mock qualifying run) in first practice there (on Friday), and we weren’t very good. So (crew chief) Greg (Ives) and the guys did a good job getting it a lot better today.

“I thought I left a little bit on the table there in the third round, a little disappointed in myself, but better than overdriving it and smacking the fence or whatever. Not a terrible qualifying effort, obviously, being fourth. It’s way better than I’ve ever started here before.”

Newman, who hasn’t added to his 51 career poles since 2013, will start sixth for the third time this season and the second time in three races.