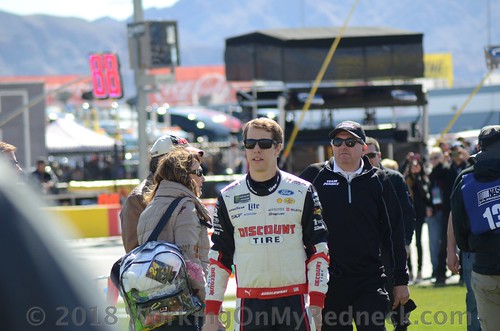 Brad Keselowski took the lead in Saturday’s Sport Clips Haircuts VFW 200 at Darlington Raceway when the two cars in front of him tangled off Turn 2.

That was all the driver of the No. 2 Team Penske Ford needed to collect his first NASCAR Xfinity Series victory at the Track Too Tough to Tame.

From a restart on Lap 91, Keselowski chased pole winner and race leader Ross Chastain, who won the first and second stages in his maiden run in the No. 42 Chip Ganassi Racing Chevrolet. On Lap 104, Keselowski pulled ahead in Turn 3 but brushed the outside wall as Chastain regained the top spot with a crossover move to the inside.

Keselowski’s bobble allowed Harvick to pass for second, but on Lap 111, Harvick and Chastain collided off Turn 2 and handed the top spot to Keselowski, who held it the rest of the way.

With his third victory in five starts this season and the 39th of his career, Keselowski knocked a significant item off his bucket list. Darlington and Sonoma had been the only two active NASCAR tracks where Keselowski had raced without a national touring series win.

“I really wanted to run this race for that reason,” said Keselowski, who beat runner-up Cole Custer to the finish line by .738 seconds. “I just haven’t been that great here at the (Monster Energy NASCAR) Cup level, and I’m trying to get better.

“This is such a huge confidence boost.”

Had Chastain and Harvick not wrecked together, the ending might have been quite different!

“I could keep up with Ross, but I couldn’t pass him—he was so fast,” Keselowski said. “Tried to make the move and brushed the wall, and he got back by me, and then they had the wreck off of (Turn) 2, and I was able to take advantage of the opportunity.”

Up until Lap 111, Chastain had a dream race going in his first trip in an Xfinity car capable of battling for the lead. Harvick made a move to Chastain’s inside through Turns 1 and 2. Unwilling to give up the top spot, Chastain stayed in the gas within inches of the right side of Harvick’s No. 98 Ford.

Harvick’s car drifted up into Chastain’s No. 42 Chevrolet, which bounced off the outside wall at the exit from Turn 2. Chastain then clipped the rear of Harvick’s Ford and sent it spinning. Harvick expressed his displeasure by parking in Chastain’s pit stall before exiting the race.

“I tried to stay as low as I could, and he just rode on my door,” Harvick explained later. “That’s just a really inexperienced racer and a really bad move there and got the air and got on beside me and just kept going up the race track. I couldn’t do anything with the wheel.

“So you’ve got a really inexperienced guy in a really fast car and made a really bad move, and then wrecked me down the back straightaway and hooked me to the right. That’s probably the reason that he’ll never get to drive many of them again.”

Chastain hadn’t seen a replay of the incident when he gave his assessment after finishing the race in 25th, two laps down.

Tyler Reddick, Denny Hamlin and Elliott Sadler completed the top five. Justin Allgaier finished seventh and retained the series lead by 16 points over Sadler in second and 17 over Custer in third. Christopher Bell fell out early after spinning in Turn 3 and colliding with Daniel Hemric’s Chevrolet and dropped to fourth in the standings.

With two races left before the cutoff for the Xfinity Playoffs, Matt Tifft (eighth Saturday), Brandon Jones (12th) and Ryan Truex (13th) locked themselves into Playoff berths on points.

Check out the results of the Sport Clips Haircuts VFW 200.