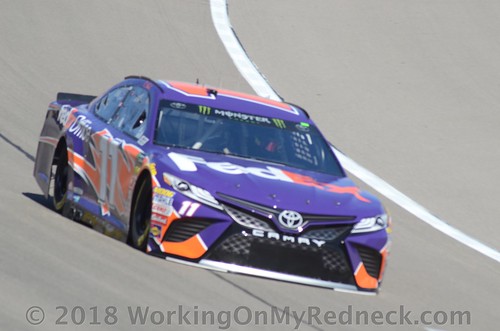 Denny Hamlin is not only the defending Southern 500 winner but swept the 2017 weekend last September winning the NASCAR Xfinity Series race as well. He boasts the best average finish in the field and has an amazing 10 top-10 finishes in 12 Monster Energy Series starts at Darlington Raceway.

But Hamlin’s not only interested in celebrating the seven-decades of “Throwback” in this Sunday’s Bojangles Southern 500, he’s intent on throwing it “forward.” He needs a win.

The driver of the No. 11 Joe Gibbs Racing Toyota Camry has won at least one race every season since he made it to NASCAR’s premier series in 2006. Seven-times he won multiple races in a season – including a career-high and 2008-best eight races.

But the perennially popular 37-year old Virginian is winless so far in 2018 and eager to change that at one of his best tracks.

History offers hope for Hamlin, who has two wins in the Monster Energy Series and five more in the NASCAR Xfinity Series and boasts the best average Cup finish (5.8) among drivers with more than one start at the 1.366-mile track known for being “Too Tough to Tame.”

“You know, there’s something about the racetrack that kind of suits my driving style,” Hamlin said last September in the winner’s press conference. “From the very first time I came here at a test, Tony Stewart was here, and kind of really helped me kind of find my way around this racetrack.

“I don’t know what it is about it, but it just suits the way I drive. You know, to be able to run a little bit of an unorthodox line I think helps me at this racetrack, and I think really just every time I come back, I learn a little bit more from what I did in the past, and it just refines the way you do things and you get a little bit better and it’s led to success.”

In keeping with the “throwback” tradition of Darlington, did you know that the deepest a race winner has started a race is 43rd. Johnny Mantz claimed that victory in the inaugural Cup race at Darlington in 1950 – in a field of 75 cars. Mantz won the race by nine laps. Fireball Roberts and Red Byron finished second and third and headlined an entry list that also included nostalgic racing names such as “Slick” Smith, who finished 33rd and “PeeWee” Martin, who finished 30th. As big as the field was – 67 of the 75 drivers completed at least 200 laps.