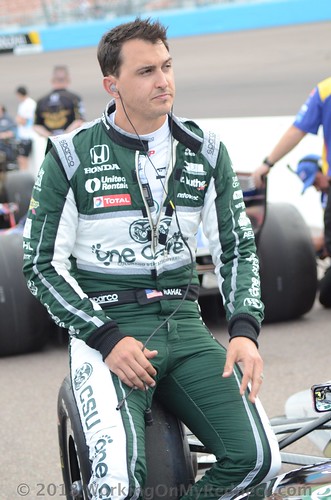 The best starting position for the team of second place came in 2003 by Kenny Brack and the best finish of fifth place was in 1999 by Max Papis.

In 2017, Rahal started 13th but during the pace laps, Kanaan spun and Rahal moved into 12th before the green. Once the race started, pole-sitter Will Power spun and collected Carpenter and Sato to move Rahal into ninth place.  He was able to stay out longer than a few cars and cycled into fifth before his first stop on Lap 61 of 248.  He returned to the track in eighth place and held the position until his second stop on Lap 104 during a full course caution for JR Hildebrand.  After the restart, he passed Ryan Hunter-Reay for seventh on Lap 113.  He held the spot until the next pit cycle approached and took over sixth place when Rossi pit before he made his third stop on Lap 158. He returned to the race in sixth place and held it through a full course caution for Chilton who spun. He passed Hinchcliffe for fifth on Lap 183 when the Canadian had to check up behind Dixon and Rahal got around him.  During his fourth and final stop under caution for Hunter-Reay who hit the wall, Rahal pitted from fifth place but left the pit with the fuel probe still attached to the car.

At the start of the race, telemetry showed that the fuel probe sensor wasn’t working so the team had to take extra precautions for the stops.  The probe sensor ensures that the car cannot go into gear to depart until the fuel nozzle is out of the car.  Race control ruled that Rahal had to go to the back of the field due to the incident and he moved back to 14th place.  He passed Andretti on the restart and later passed Jones for 12th, which he held until the checkered flag.

“We didn’t test there so there will be a lot of unknowns when we go back. We were pretty good at Iowa in the race and I would anticipate we will be pretty strong at Gateway. Last year we didn’t qualify that well but in the race, we were actually pretty competitive but we had a little fueling issue at the end which was my fault. We had a fuel probe sensor that went bad and I got a little too eager and left the pits before I should have.

Unfortunately, I got a penalty and had to go to the back. But we had a strong race; we were running fifth and would have had a top-five for sure so it was disappointing not to get those points. I’m excited to go back. I anticipate a good event with a great crowd. It should be a lot of fun.”

“The event is great and has quickly become a very strong race for the series. The promoters have done an amazing job with it. I have seen all of the promotions and (wife) Courtney and I were part of some of it with our media day last week. The city has really gotten behind the event which is so important.  It certainly helps that St. Louis is such a great sports town. We felt that we had a really good race car at Pocono that we let slip with how the race start played out so we’re hoping to get to Gateway and make the most of every opportunity.”