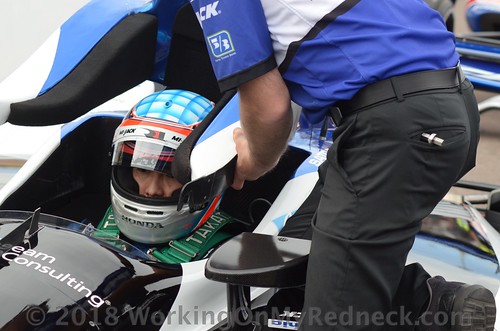 This will be Takuma’s second race here but his first one didn’t last long. He qualified a strong sixth but the race went yellow when Tony Kanaan spun on the pace lap.  Once the green flag flew, pole-sitter Will Power lost control of his race car as did Ed Carpenter and collected Sato as he was spinning. Sato only completed six of 248 laps. He finished third at the previous short oval race this season at Iowa Speedway and is hopeful for a strong performance at Gateway.

“Unfortunately it was a short race for us last year but it is a very impressive facility.  We tested there last year and then after that, the track and promoter’s commitment was very impressive and they made some improvements so when we went back it was a completely different track. It is a great, fun track. The characteristics of Gateway are very unique. I think it is one of the best short ovals because there is such high banking in Turns 1 and 2, and Turns 3 and 4 are kind of flat and, as we observed, it was one of the best short oval races last year. I think it was a great show.  The fans were really excited and it was great to see so many enthusiastic fans at the race.”

“It is going to be a challenging race. Iowa was an exceptionally interesting race because there were so many lanes available so instead of following others, you can stagger so you have fresh air. Last year it worked really well at Gateway because Turn 3 and 4 were nearly flat (on the throttle) all the time even when you were following a car so that means essentially at the exit of Turn 2 until the entry to Turn 1 you can see down the long straight so you get a great tow effect, therefore, a lot of passing was happening in the Turn 1 entry.  But this year, because there is a reduction of downforce, if we can follow cars in Turns 3 and 4, I think it will be great racing again. If not, it will be difficult to overtake.  Since we had a very good race at Iowa, I am certainly looking forward to going to Gateway.”