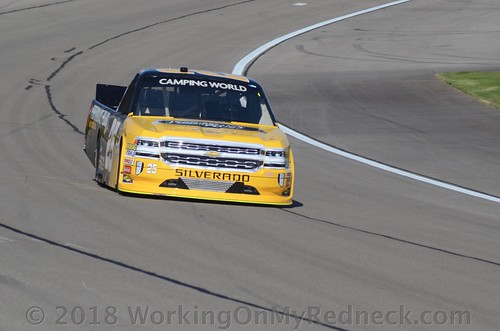 Stage One: Despite starting at the rear of the field, Dalton Sargeant diced his way through the traffic, making it to the top-15 after only two laps. When the first caution of the race came out on lap 16, crew chief Doug Randolph called the No. 25 down pit road for two left side tires, fuel, and a chassis adjustment. Restarting 17th with nine laps left in Stage One, Sargeant was able to make his way to 14th before the green-checkered flag was displayed. Looking to gain track position, Sargeant pitted for right side tires, fuel and to take tape off the nose under the stage break, lining up in the sixth position for Stage Two.

Stage Two: Struggling with the handling of his Performance Plus Chevrolet throughout Stage Two, Sargeant slipped back to 13th. Coming to pit road under the stage break, Sargeant received four tires, fuel and a round of chassis adjustments to loosen his Chevy Silverado up before restarting 10th on lap 68.

Final Stage: After only five laps, the caution came out, allowing Sargeant to come to pit road once again to top off on fuel as well as for a track bar adjustment to aid in the handling of his No. 25. Restarting 15th, Sargeant worked his way up to 11th-place with less than 30 laps to go. With green-flag pit stops beginning, Sargeant took the lead on lap 115, and remained there until his green-flag stop, on lap 118, for two right side tires and fuel. As Sargeant rejoined the field on track, the caution came out on lap 120, allowing Sargeant to come back down pit road for left side tires under the caution. Lining up 10th for the final restart of the night, Sargeant raced his way to a hard-fought sixth-place finish, the highest finishing NCWTS rookie of the race.

Additional Notes:
– Sargeant had to start from the rear of the field for an unapproved adjustment after qualifying.

“We had a good finish in the No. 25 Performance Plus Chevy. Really, all of GMS Racing had a good night. All weekend we had an issue with just raw speed. My guys worked really hard throughout the weekend to try and find the issue, but never could. We probably should have finished outside the top-10 with the issues, but we clawed our way to the front there at the very end. Doug (Randolph) made some great calls on the pit box to get us track position all night but we just couldn’t ever maintain it over a long run. With such a short run at the end, we were able to hang on and finish sixth. My hat is off to the guys on this race team; they’ll go back to the shop and tear everything apart and find the issue. We’ll come back and be a lot better for Martinsville (Speedway).”