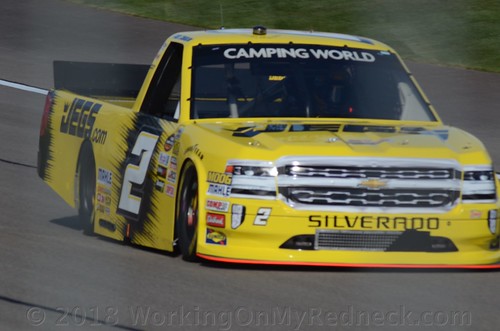 Stage One: Cody Coughlin climbed his way into the top-10 before the conclusion of Stage One on lap 30. He reported that his JEGS.com Chevy was driving better than it had all weekend, but he was fighting “tight off” on the exit of the corners. Crew chief Jerry Baxter called Coughlin down pit road under the stage break for four tires, fuel and to pull tape off the grille, lining him up 13th for the restart.

Stage Two: Knocking on the door of the top-10 during Stage Two, Coughlin ended the stage in the 11th position after still fighting a Chevy Silverado that progressively got tighter throughout the 26-lap green-flag run. Coming down pit road under caution, Coughlin’s No. 2 received four fresh tires, fuel and chassis adjustments to loosen his JEGS.com vehicle up. After a good stop by the pit crew, Coughlin was scored in the eighth position for the start of the Final Stage.

Final Stage: With a stellar restart, Coughlin weaved through traffic to fifth after one lap. Continuing his climb to the front, Coughlin made his way to the third position before a caution on lap 73. Happier with the handling of his JEGS.com Chevy, Coughlin ran in the third positon, within striking distance of the leaders, before slipping back a couple positions as his No. 2 began to tighten up over the long green-flag run. Baxter called Coughlin to pit road for his final pit stop on lap 114 under green for four tires, chassis adjustments and a splash of gas to make it to the end of the race. However, before green-flag pit stops could fully cycle through, the caution came out on lap 120, catching Coughlin one lap down. With the leaders pitting, Coughlin was able to take the “wave around” to get his lap back, lining up 13th for the final 11 laps. Coughlin quickly got to work, making up as much ground as possible, crossing the finish line with an eighth-place finish, his first top-10 finish of the 2018 NCWTS season.

Quote:
“We had such a fast JEGS.com Chevy tonight, especially compared to where we started the weekend. It felt good to run up front and be in contention for the win. Unfortunately, the last caution didn’t fall when we needed it to and caught us a lap down. Our luck is starting to turn around, we just need a bit more on our side.”