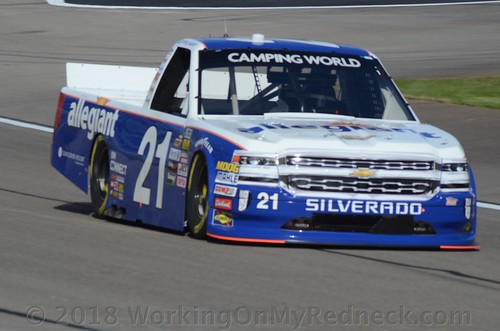 Stage One: At the start of the race, Sauter fell back as far as the seventh position before making his way back to the front and challenging for the lead. Sitting in the fourth position under the first caution, he once again lost track position on the restart, settling back into seventh. Sauter battled a loose on entry, tight on exit handling condition throughout the first 30-lap stage. He brought his Allegiant Chevrolet to pit road at the Stage One break for four tires, fuel, and a chassis adjustment. With several trucks making a two-tire stop, Sauter restarted in the eighth position.

Stage Two: Continuing to struggle on restarts, Sauter dropped back to the 12th position at the start of Stage Two before making his way back into the eighth position before the green-and-white checkered flag waved. He reported to the team that the previous chassis adjustment did not help and was still too tight on exit. Under the stage break, he pitted for four tires, fuel and an air pressure adjustment, in addition to the team correcting the previous adjustments. Quick work by the No. 21 pit crew placed Sauter in the second position for the start of the final stage.

Final Stage: Sauter’s handling issues continued into the Final Stage as he maintained his position in the top-five through the first half of the 67-lap segment. He took over the third position before coming to pit road under green for his final stop of the night with crew chief Joe Shear, Jr., calling for right side tires, fuel, and an air pressure adjustment. A slow stop cost Sauter one position on track but a quick caution following green-flag stops allowed an opportunity for him to challenge the leaders for the win. With less than five laps to go Sauter tracked down the No. 51 of Kyle Busch, but pressure from the No. 16 truck on the final lap resulted in a runner-up finish.

Additional Notes:
– Sauter has earned top-three finishes in each of the first three races of the 2018 season to hold a 39-point lead in the NCWTS point standings heading into a break in the schedule.

Quote:
“I could not get going tonight on a restart. I’d find myself getting great track position from great pit stops, then drop the green flag and I’d get shuffled out and find myself eighth, ninth, or tenth. I thought ‘well, we’ll have to pick them off one at a time.’ Our Allegiant/Sunseeker Resorts Chevrolet was good; long-run speed was killer. I knew that from practice yesterday, and I had fears of going into today too free, and I was right. It was way too loose to start the race. We made some adjustments and that made it worse. It was just an up and down night for us. I felt like we passed a lot of trucks tonight, just because I couldn’t get going.

“I felt like I had one last shot to get to Kyle (Busch). I’m finding with the new engine package that you have to time your passes. It’s not like the old days where you could just make a move, stick with it, and work them over. Now you have to plan your move. There was an opportunity there to pass Kyle but I knew I couldn’t do anything in (turns) three and four, so I had to just fall in line with him and save it for another run. The draft is crazy with this engine package. Overall it was a good night, a great start to the season and I feel like, again, we learned a lot that we can work on during the break.”