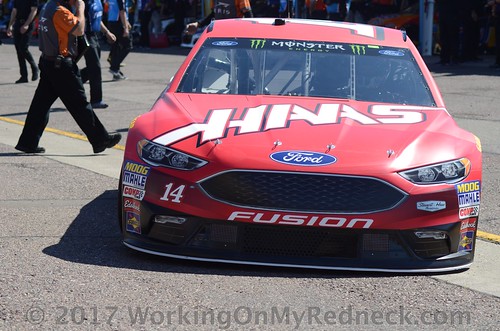 ● The crew told Bowyer he was the fastest car on the track on lap 14.

● Climbed to seventh by the lap-30 competition caution. Bowyer asked for no adjustments during his pit stop.

● Bowyer immediately reported his car felt much looser in the corners.

● Dropped to eighth before pitting for adjustments under green on lap 128.

● Pitted under caution on lap 158 for air adjustments. Bowyer restarted the race in 10th with seven laps remaining in the stage.

● After some frantic racing in the final laps, Bowyer finished the stage in ninth about five seconds behind the stage winner.

● Bowyer moved to fifth by the lap-200 mark as the rain began to sprinkle the track.

● The rain held off, and Bowyer showed he would be a threat for victory lane.

● Bowyer restarted the race in fifth with 23 laps remaining.

● Surged to third on the restart and likely would have finished second if the race had lasted another lap.

● Kevin Harvick’s victory in the Folds of Honor 500 marked the 44th overall win for Stewart-Haas Racing (SHR). It was the organization’s 40th points-paying Monster Energy NASCAR Cup Series win and its second at Atlanta. Tony Stewart won at Atlanta on Sept. 5, 2010.

● This was SHR’s fourth NASCAR Cup Series victory with Ford. The team won its first race with Ford when Kurt Busch captured the 2017 Daytona 500.

● All four SHR drivers finished on the lead lap and in the top-13 at Atlanta on Sunday. As a result, all four drivers are ranked in the top-10 of the driver point standings.

● There were five caution periods for a total of 28 laps. Thirteen of the 36 drivers in the Folds of Honor 500 finished on the lead lap.

Clint Bowyer, driver of the No. 14 Haas Automation Ford for Stewart-Haas Racing:

“It’s a fun racetrack. There aren’t many places left that can put on a show like that and be able to race all over the place, so I just appreciate this place. I appreciate Harvick’s speed. He was so fast. Man, I’m telling you our Haas Automation Ford was good all weekend long. All of our Stewart-Haas cars were fast. That’s a credit to everybody’s hard work over the offseason, and it paid dividends here tonight.”