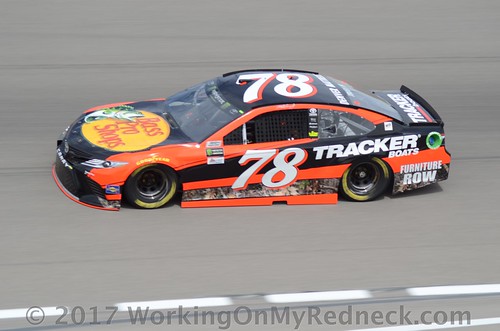 With all the adversity that faced them throughout the weekend, Martin Truex Jr. and the Furniture Row Racing team dug deep to post a fifth-place finish in Sunday’srain-delayed NASCAR Cup Series race at Atlanta Motor Speedway.

The result was Truex’s fourth straight top 10 at and his third career top five at the 1.54-mile track. The finish lifted Truex from 12th to seventh-place in the driver point standings.

It wasn’t a smooth sailing weekend for Truex. It started on Friday when he missed qualifying due to his No. 78 Bass Pro Shops/Five-hour ENERGY Toyota failing technical inspection. The penalty not only positioned Truex with a 35th-place starting position, he also had to sit out 30 minutes in the final and only practice on Saturday.

But if anyone thought that Truex was going to be a back-of-a-pack racer, they were mistaken. It took him only 15 laps to jump into the top 10 and when the competition yellow waved on Lap 30 of 325 he was running sixth. He kept on moving forward and was positioned in second place on Lap 43.

After finishing fourth in the first stage, Truex was in position for another solid result in the second stage, but an air gun issue during a pit stop prior to the completion of Stage 2, dropped him to 15th.

Twice during the race, the No. 78 had pit-stop problems with the air guns. The team was able to swap out the air guns which are now provided by NASCAR. Had it not been for the air gun issues on the pit stop before the completion of Stage 2, Truex would most likely be a couple of positions higher in the point standings.

“We fought hard all day, never gave up,” said Truex. “We had some issues that kind of sucked, but I guess we’ll have to work through it. We fought track position, fought the car going away too much on long runs. But overall it was a decent day and something to work from.”

When the last caution came out on Lap 296, Truex was running ninth. He excelled with an aggressive restart to gain a few positions before taking the checkered flag.

“Really proud of everybody on how we bounced back,” said Truex. “Proud of Cole (Pearn, crew chief) for fighting his way to make the car better. We all fought hard with the best we had and we’ll keep working hard to figure out the new rules. Next week is Las Vegas and we’ll fight just as hard and hopefully be successful as the defending champion of that race.”

The race had 24 lead changes among eight drivers (Truex was one of the eight leaders) and there were five cautions for 28 laps.

The next race is Sunday, March 4 at Las Vegas Motor Speedway.