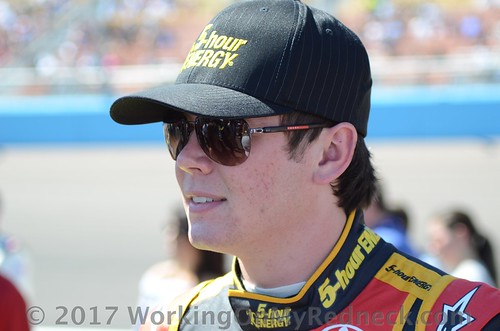 Chicagoland Speedway is not the home track for Michigan native Erik Jones but his confidence leading into Sunday’s Tales of the Turtles 400 is as if it were.

“Any time you can go back to a track where you’ve been successful, whichever series you’re racing, you’re always going to have a little more confidence,” said Jones. “Chicagoland Speedway is one of my favorite tracks on the schedule because we’ve won there twice in the XFINITY Series so I’m excited to see what we can do there in the 5-hour ENERGY Toyota.

“I like the fact that you can move around at Chicagoland, run the bottom, middle and the top lane. The asphalt is worn out, a little bit slick. I think all that combined feeds into my driving style so, again, I have a lot of confidence there.”

“One of the goals we set at the beginning of the year was to get a win so the primary focus for these final 10 races is to get one and close the year out strong,” said Jones. “We may take an extra risk here or there but they’re relative to what’s going on at a specific time in the race. This 5-hour ENERGY team has really come together strong for the past couple of months now so we’ll just keep doing what we’ve been doing, minimize our mistakes and, hopefully, that creates the opportunity to win one of these things.”