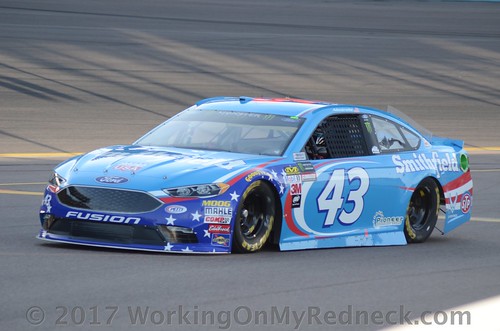 Yesterday was not a good day for Danica Patrick and Aric Almirola.  It was announced that both drivers will not return to their previous employers.  Danica posted on her Facebook page that she will not be returning to Stewart-Haas Racing in 2018. Likewise, Richard Petty Motorsports announced that not only would they be losing one of their primary sponsors to Stewart-Haas Racing, Smithfield Foods, but also that Aric Almirola would not return as the driver of the famed RPM No. 43 Ford Fusion.

Is Danica’s NASCAR driving career over?  It would appear that it is, at this point.  Over her NASCAR career she has been unable to be competitive on a weekly basis.  These days she drives the same equipment that Kevin Harvick, Kurt Busch and Clint Bowyer does but she has continued to finish near the back of the pack, 20th-32nd each week.  Those finishes will not generate the necessary sponsorship dollars required to keep a Cup team financed for 36 races.

After GoDaddy left Danica two years ago, it became more apparent that it was going to be difficult to sell sponsorship to the 36 race schedule for her.  Coupled with the law suit that Nature’s Bakery levied against her and SHR, it added to the fact that the apparent return on investment (ROI) was not fulfilling to the sponsors, and that her time in NASCAR was drawing to a close.

Aric Almirola, as well as the entire Richard Petty Motorsports organization, has suffered from the same lack of performance that has plagued Danica.  After his mid season injury word began leaking out that Almirola’s job was not really secure.  This week the announcement that Smithfield is leaving RPM at season’s end has hit that team right in the pocketbook!  In turn, RPM announced that Almirola would not return to the organization in 2018.

After all, NASCAR is a performance driven profession and if the performance is not there you will be replaced in time.

Now the speculation is rampant as to who will fill these two vacancies in 2018.

There are several drivers that could fill either of these two cockpits.  Both Kasey Kahne and Matt Kenseth are available for employment in 2018.  Either driver may be a good fit to replace Patrick at SHR, as well as a replacement at RPM.

However, do not overlook the SHR Xfinity driver, Cole Custer.  Custer has had a very good rookie season with the rookie SHR entry into the NXS.  Custer appears to be in a good place to qualify for the NXS playoffs.  I think that you may see this young man stepping up to fill the empty seat vacated by Patrick’s exit from SHR.

As mentioned above Kahne and Kenseth could move over to RPM, but I think that would be highly unlikely for either since the No. 43 is not a very competitive team, presently.  Additionally, their requested salary may be outside RPM’s budget.

Therefore, my thought is that RPM may be trying to get enough sponsorship together to put Darrell Wallace, Jr. into the cockpit for 2018.

Over the next couple of weeks these seats will be filled and the work on getting the requisite dollars to cover the 36 race schedule for 2018 will be announced.