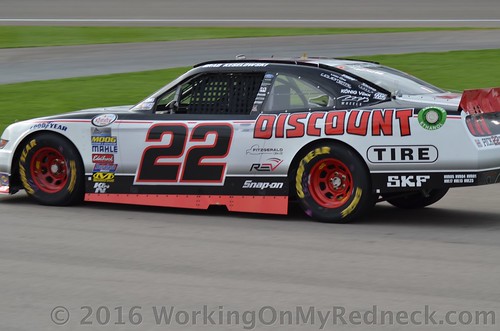 Recap: Brad Keselowski and the No. 22 Discount Tire Ford Mustang team survived one of the longest NASCAR XFINITY Series (NXS) races in recent history and brought home a fourth-place finish in the Powershares QQQ 300 at Daytona International Speedway (DIS) on Saturday evening. After starting the race from the sixth position, Keselowski quickly made his way to the front of the field by the third lap. Unfortunately, for the Discount Tire team, Keselowski was shuffled back in the pack just prior to the first pit stop of the day at lap 19 and resulted in him being caught up in a multi-car incident on lap 23. The No. 22 Ford received only minor damage and Keselowski was able to continue after quick repairs to finish 13th in the first, 30-lap segment that featured two, long red-flag periods. Keselowski started the second, 30-lap segment from the sixth position and was able to keep his No. 22 Ford up front throughout as he and the other leaders traded the lead several times in an exciting duel. Having led 126 total laps at DIS in his NXS career, Keselowski kept his Ford in position for his first series win during the final segment, but over the final laps of the race he did not receive the help needed to make one final charge to the front. The 2010 series champion crossed the finish line in the fourth position in a race that took over three hours to complete.

Quote:  “We seem to run up front a lot in this race, but we just can’t quite bring home the win. The Discount Tire Ford Mustang team gave it a full effort today. I’m really proud to see another Ford win at least, but I wanted it to be me. That’s just all we had.  We needed a little help on that restart. We had I think the 3 and the 62 behind us and I guess something happened to the 3 and he ran out of gas, I don’t know. It would have been interesting to see what would have happened if I had somebody behind me. That would have been exciting. A race like this sometimes you just feel good to survive. There were a couple instances where I didn’t think that was going to happen. It was an interesting day.”