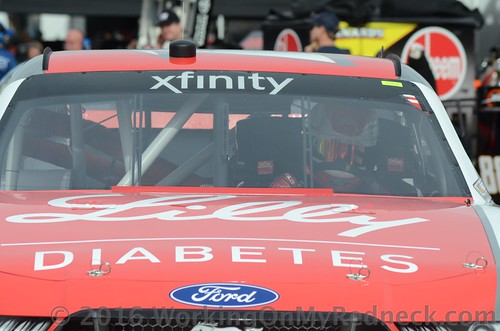 The second race of the weekend at Daytona was just as much of a destruction derby as the Friday night CWTS race was!  At the end of the race there appeared to be only three cars out of the forty entrants had did not have some kind of damage to their cars, many were reduced to crumpled sheet metal.  The race took slightly more than 4 hours to race 300 miles.

For Ryan Reed, there’s magic in the air at the Birthplace of Speed.

With the race going four laps past its scheduled distance of 120 laps, and with the series running NASCAR’s new three-stage event format for the first time, Reed blocked Kahne in Turn 2 on the first of two overtime laps and stalled his momentum.

From that point on, Reed stayed out front and got to the finish line .219 seconds ahead of Kahne, with Austin Dillon a close third and Brad Keselowski and Brendan Gaughan fourth and fifth, respectively.

Reed’s triumph was a welcome start to the season for Roush Fenway Racing, which suffered through a winless season in 2016.

“I’m just so excited,” Reed said in Victory Lane. “I knew if I could run two perfect laps (in overtime) with however many blocks I had to do in those two laps, I’d be standing here.”

In a race that produced 10 cautions, one short of the event record, 20 of the 40 cars were running at the finish. Only three cars escaped damaged from a succession of major wrecks-those of Kahne, Ty Dillon (who ran out of gas on the first overtime lap) and David Starr (who dropped out after four laps with engine issues).

The driver who got the worst end of the accident toll was Elliott Sadler, who led a race-high 40 laps and won the first two stages under caution (earning one playoff point for each) before clobbering the backstretch wall on Lap 104 in a 16-car accident.

Sadler was credited with a 24th-place finish but managed to hold third in the series standings, thanks to points earned in the first two stages. Reed leaves Daytona with a nine-point lead over second-place Brendan Gaughan, with Sadler 14 back.

“Man, that was a heck of a race,” Gaughan said. “What a run to get back to the top five! Me and Austin-we were beasts coming through the field.

Before the race reached the end of the 30-lap first stage, the event had been red-flagged twice for a pair of massive wrecks that eliminated more than a handful of drivers expected to contend for the series championship.

On Lap 23, Scott Lagasse Jr. turned the No. 42 Chevrolet of Tyler Reddick across traffic on the backstretch, causing a colossal chain-reaction pileup that involved 20 cars-literally half the field. That wreck knocked out Cole Custer in his debut in the No. 00 Stewart-Haas Racing Ford, as well as Sunoco rookie Spencer Gallagher in the No. 23 GMS Racing Chevrolet.

“My bad,” Lagasse said on his radio in perhaps the tersest apology ever for a mistake that damaged that many cars.

As drivers jockeyed for position on Lap 29, rookie Daniel Hemric hit a patch of “speedy-dry” from the first wreck-which he described as “like driving on ice”-and washed up the track into the left rear of Justin Allgaier’s Chevrolet, triggering a crash that involved 13 cars.

“I feel like we were racing too hard,” said Suarez, who is running for points in the Monster Energy NASCAR Cup Series this season. “It’s too early. I don’t really know what happened exactly. I haven’t seen the replay slowly.

Reed was involved in three of the accidents, including the Lap 104 incident, but recovered to win the race.

“I started out pretty aggressive and made some mistakes and ended up in the back of the pack,” said Reed, who suffers from Type I diabetes. “I knew if I was there at the end it doesn’t matter where you are at, you will have a shot.

“I reminded myself of that, took a deep breath, bided my time and found my way to the front at the end. Everyone was so aggressive. This new format is breeding a lot of aggression-there’s a ton of incentive.”

Check out the unofficial results of the Powershare QQQ 300 at Daytona International Speedway.