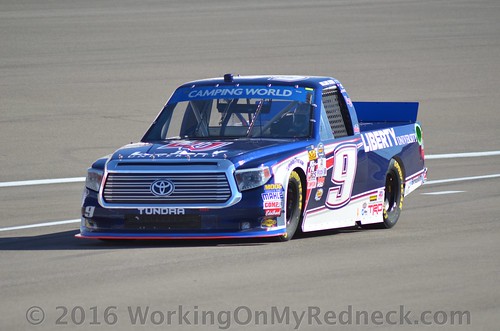 William Byron took the checkered flag in his No. 9 Kyle Busch Motorsports Toyota, winning his seventh race of the season Friday night in Miami. His seventh win of 2016, Byron led for 31 circuits around the 1.5-mile track en route to Victory Lane.

Byron’s dominant performance this year earned him the Sunoco Rookie of the Year Award.

“It feels awesome. It’s just — it’s incredible. I mean this team has worked so hard all year. We just had an unfortunate situation last week that we couldn’t control, but, man, they brought a good truck,” Byron said post-race, referencing his engine issues at Phoenix that led to his elimination from the postseason. “These guys just are awesome.”

Tyler Reddick finished second in the No. 29 Brad Keselowski Racing Ford while Johnny Sauter wheeled his No. 21 GMS Racing Chevrolet to a third-place finish Friday at Homestead-Miami Speedway, crowning him the 2016 Camping World TruckSeries champion.

“I just made a couple of mistakes,” a visibly defeated Bell said on pit road. ” … Overall it just wasn’t our year.”

Check out the unofficial results of the Ford EcoBoost 200.