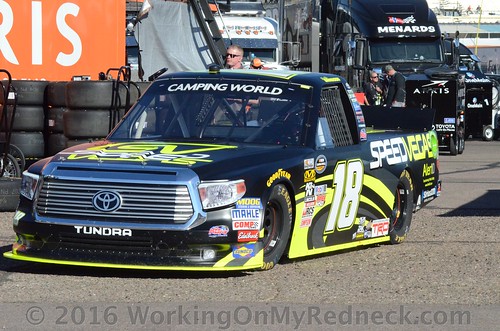 Last weekend at the Phoenix NASCAR races I was fortunate to have been able to coordinate, with help of a couple of special people, a sit down conversation with the newest driver in the Kyle Busch Motorsports stable of 2017 drivers, Noah Gragson.

Noah is an 18 year old young man from Kyle’s hometown of Las Vegas, NV.  In fact Gragson seemed to have followed some of the footsteps that his new employer walked in a few years removed.  Both men began their racing careers at the paved tracks in Vegas, with emphasis on the Bullring at Las Vegas Motor Speedway.

As you will learn in this interview, Noah only started his racing career 4 1/2 years ago, at the age of 13, has now skyrocketed on to the national scene and will be driving in the Camping World Truck Series fulltime next year.

Here is my one-on-one with Noah Gragson:

WorkingOnMyRedneck:  Noah, our readers are always interested in getting to know the young up and coming drivers in NASCAR.  So let’s start with the most basic question.  How did you get involved in racing?

Noah Gragson:  I started 4 1/2 years ago, in 2012,  racing in my home town of Las Vegas at the age of 13 years old.  I started racing Bandeleros at The Bullring, a 3/8 mile paved track that is part of the Las Vegas Motor Speedway complex.  I ran Bandeleros for one year and then stepped up to the Legend cars for two years.  At the end of my second year in the Legend Cars, 2014,  I made three super late mode races at The Bullring.  Those super late model races led to the opportunity to get together with Jefferson Pitts Racing.  Beginning in 2015 I drove in the K&N Pro Series West for Jefferson Pitts Racing.  I really had no prior experience racing these big cars in the K&N West, but it was the perfect opportunity!  We really didn’t know if that opportunity would come around again. In 2016 we moved up to run both K&N West and East Series.  I am the only driver to run both series full time and we picked up four wins this year.  It was a pretty good year for us!

WOMR:  You must have been a pretty busy young man.  How was it to race full time in both series?

WOMR:  So, Noah, you are 18 years old and you must have just graduated from high school?

NG:  No, I am still in high school and doing home school at this time.  I am doing the home school on my computer Monday through Friday and at the race track on the weekends.  It is a lot for sure!

WOMR:  When are you going to finish high school?

NG:  I will finish high school in one more semester.

WOMR:  You said that it was a big jump from Legends to the K&N Pro West series.  Just how big of a jump was it?  How much did it take  you to go from racing at The Bullring in Vegas to running with the big dogs?

NG:  There was a variety of different things to deal with.  There were more tracks that I didn’t have any experience on.  I am racing with guys that have a ton of experience, like David Mayhew, those guys have been racing their whole lives.  Getting in with Jefferson Pitts Racing was good and helped a lot, because they were able to coach me.  I have been like a sponge absorbing everything from them.  I was able to finish 3rd in my first race and I won my third career race!  That got some weight off of my shoulders to be successful early with them.  That also helped me with my confidence.  I thought that “I can do this”.  The biggest thing that has helped me was being with Jefferson Pitts Racing and knowing that they bring great equipment to the race track every week also helps my confidence.  I am very thankful that I got the opportunity with them.

NG:  I am actually under contract with Kyle Busch Motorsports.  We signed a contract to run the full Camping World Truck Series races in 2017.  We are not sure what the truck number will be or who the crew chief will be yet.  We are still waiting for everything to get settled.  I am really looking forward to next year, it is going to be fun.

WOMR:  With your Truck season starting out in Daytona, how are you going to like that?

NG:  I was fortunate enough to watch the ARCA race at Daytona this past February.  I got a little bit of a taste to see how the draft actually works in real life.  I have watched videos on YourTube about drafting and I have watched the races on TV.  I was also fortunate enough to  test an ARCA car at Daytona earlier this year in the winter test.  We were running around there drafting and everything with a few of my teammates.  After a few laps on the track I came on the radio and said that now I see why the big ones happens so easily because it is so hectic, you are going so fast, and you are racing inches apart!

WOMR:  Do you get a sense of speed at Daytona?

NG:  Yeah, I mean it definitely feels fast.  The way that I got the feel of speed is that I stuck my hand out of the window and it dang near ripped my hand off because the air was going so fast!  It doesn’t feel like you are going that fast when you are inside the car because the straightaways are so long.  It takes so long to get down to the end of the straightaway.  It feels like you are going 25 MPH, but you are really going 180 MPH!

WOMR:  Can you feel the buffet off of the other cars?

NG:  Yeah you can definitely feel your car sucking up to the car in front of you.  In the ARCA cars you can have a huge run on the car and your car will stall out about 1/2 of a car length behind the car.  I couldn’t figure out why we couldn’t just pass them.  But the aerodynamics prevents it.  It is called the neutral area.  That is where the air comes off of the front car and is like a barrier or wall and prevents you from accelerating past the car.  It is like bumping up against a wall.

WOMR:  Where do you see yourself in five years?

NG:  Five years is a lot of time!  I haven’t even been racing for five years yet!  I want to be racing for a living, as in making money.  I just want to be in a race car and having fun.  It is what  love to do.  Although I am relatively new at it, I think that I have found my passion.  I enjoy every time that I strap into that car.  Hopefully,  I will be racing on Sundays, but I am taking it race by race right now.

WOMR:  If you weren’t a race car driver, what would you want to be doing?

NG:  I love anything that is action sports.  I love going fast in a race car!  I love riding my dirt bike, I love skateboarding, I love the extreme sports.  I don’t know.  It’s hard to say, maybe be a professional dirt bike rider.  I don’t know if I am good enough to do that.  But they do get hurt!

After interviewing Noah I came away with the feeling that he is a very polite, focused, and driven young man.  It is my opinion that Gragson has aligned himself with a great racing organization, as well as some great racing equipment to showcase his talent. Noah has all the potential talent to take him places in the NASCAR world.  Additionally, he will have a very talented teammate in Christopher Bell that may be able to help guide him in his rookie year, not to mention his boss, the winningest driver in both the XFINITY and CWTS history, Kyle Busch.

Give this young man some time early in the season to acclimatize to the big time, but I think he has the ability to win some races in his rookie season!

One Comment on “Noah Gragson Up Close And Personal”