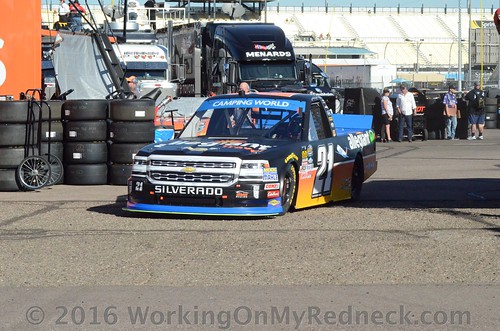 Johnny Sauter won the NASCAR Camping World Truck Series championship with a third-place finish in Friday night’s Ford EcoBoost 200 at Homestead-Miami Speedway, leaving race winner William Byron to consider what might have been.

As Byron and Tyler Reddick battled for the lead, Sauter passed Championship 4 contender Matt Crafton for third-place on Lap 119 of 134 at the 1.5-mile track. Sauter then pulled away to claim the championship as Crafton faded to seventh in the closing laps.

Byron, the polesitter, claimed his rookie-record seventh victory of the season to salve the wound of last week at Phoenix, where a blown engine late in the final Round of 6 race knocked him out of the inaugural NASCAR Camping World Truck Series Chase.

But the night belonged to the 38-year-old Sauter, who won his first NASCAR championship 15 years after making his first national touring series start in the NASCAR XFINITY Series.

“It’s not just me,” said Sauter, who started 19th in the No. 21 GMS Racing Chevrolet after a lackluster qualifying effort. “It’s the whole team—everybody at GMS Racing. “We qualified bad today, and really, I was kind of worried about it. But it felt pretty good in race trim…

“Just proud of these guys. Flawless execution on pit road tonight. (Crew chief) Joe (Shear Jr.) made great adjustments to where I could just kind of hang on. I’m not a high line guy, so I just elected to keep doing my deal and found some pretty good grip around the bottom of the race track.

“To be a champion… five years ago my old man was down here when I won the race. This is for him and for Joe Shear’s dad—great Midwest racers. My family’s here, my kids are here, my wife’s here. It’s just an awesome night. Proud to be champion, and we’ll do everything within our power to represent NASCAR and Camping World as best we can.”

The handling of Crafton’s truck eroded after the last restart, making Sauter’s championship pass all but inevitable.

Behind Crafton, Christopher Bell and Timothy Peters came home eighth and ninth to claim third and fourth, respectively, in the final series standings.

Byron charged from sixth to the front after a restart on Lap 115, finally taking the lead from Reddick 10 laps later.

“It feels awesome,” said Byron, who was also named Sunoco Rookie of the Year in the series, as expected. “It’s just – it’s incredible. I mean this team has worked so hard all year. We just had an unfortunate situation last week that we couldn’t control, but, man, they brought a good truck. Qualified on the pole.

“These guys just are awesome. God, I hate leaving this – I just hate this team not being together next year. It’s just insane how good they are and so many talented people on this race team. Can’t thank KBM enough, Toyota, Kyle and Samantha (Busch, Kyle Busch’s wife), everyone at KBM, (sponsor) Liberty University – it’s just amazing.”

Byron will drive a Chevrolet in the NASCAR XFINITY Series for JR Motorsports next season, and Bell, 21, will return to KBM with an eye on the championship that eluded him this year.