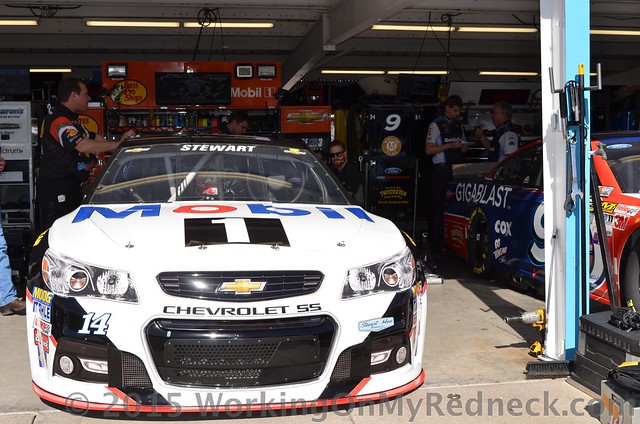 It was a heck of a comeback for Stewart, after he and his No. 14 Stewart-Haas Racing (SHR) team found themselves 31st and a lap down about a third of the way through the 500-mile race.

“Real proud of my guys today,” Stewart said. “We battled hard. The pit stops were great. I didn’t think I’d have a top-10 at the end of the day.”

Stewart qualified fifth on Thursday night, but rain from Hurricane Matthew washed out all track activities Friday and Saturday. Sunday’s race began at noon under sunny skies. Stewart held in the top-five in the opening laps, but as the laps clicked away, handling issues began to take their toll, and Stewart soon found himself in 15th.

“It feels like after 10 laps this thing is riding on top of the track,” he told the crew over the radio. “It’s like the tires have 100 pounds of air in them.”Stewart raced in 17th at the 100-lap mark as the crew continued to work to cure the issues posed by the hot, slick, 1.5-mile oval. Handling was the common complaint among all 40 drivers and teams that prepared their cars to run under the lights Saturday instead of in Sunday’s heat.

NASCAR penalized Stewart for speeding on pit lane when he made a green-flag stop just past the 100-lap mark. Before he could serve the penalty, a caution came out. NASCAR forced Stewart to restart at the end of the longest line and a lap down in 31st place.

That didn’t deter Stewart, who charged to 22nd by lap 180 and 20th at the 200-lap mark – just one spot out of the free-pass position and a return to the lead lap. The crew used pit stops to continue to work on the car and improve the handling for the final third of the race.

Stewart moved into the free-pass position when the race restarted after a round of pit stops with 100 laps to go. The much-needed caution finally came with 82 laps remaining when AJ Allmendinger hit the wall. Stewart returned to the lead lap, restarting the race in 19th, then narrowly dodged a multicar wreck at the front of the field that took out several contenders and stopped the race while safety crews cleaned the track.

Stewart restarted in 11th when racing resumed with 69 laps remaining. On the restart he moved to ninth, but knowing he’d be about five laps short of fuel he went into conservation mode to stretch mileage. That strategy went out the window with 25 laps to go when the final caution of the race flew. Stewart pitted for tires and battled in the final laps to secure a ninth-place finish.

Sunday’s result is Stewart’s eighth top-10 in 22 races in 2016, his final season in Sprint Cup racing. He missed the first eight races recovering from an off-season accident. His record at Charlotte includes a win, six top-fives and 14 top-10s, plus a total of 701 laps led in 35 career Sprint Cup starts there.

For the second consecutive week, Sunday’s race was part of a double-header with the NASCAR Xfinity Series that took the green flag 45 minutes after the Sprint Cup race ended. Rain prevented the running of the Xfinity race scheduled for Friday night.

Kurt Busch, driver of the No. 41 Haas Automation/Monster Energy Chevrolet SS, led the four-car SHR contingent Sunday finishing eighth in the race. It was his 19th top-10 this season and his 11th top-10 in 33 career Sprint Cup starts at Charlotte.

Kevin Harvick, driver of the No. 4 Busch Hunting Chevrolet SS for SHR, led a total of 12 laps in Sunday’s race but finished 38th after being sidelined by mechanical issues after 155 laps.

Busch and Harvick are representing SHR in this year’s Chase for the NASCAR Sprint Cup and after Charlotte – the fourth race of the 10-race Chase – they rank fifth and 12th, respectively, in the Round of 12. Busch leaves Charlotte with a 24-point margin over ninth place. Harvick is 12th, eight points out of the top-eight. Following the sixth race of the Chase at Talladega (Ala.)

Superspeedway, only those Chase drivers who have won a race or are among the top-eight in points will advance to the Round of 8.

With two races remaining before the Round of 8 begins, the top-12 drivers competing for the title rank as follows: