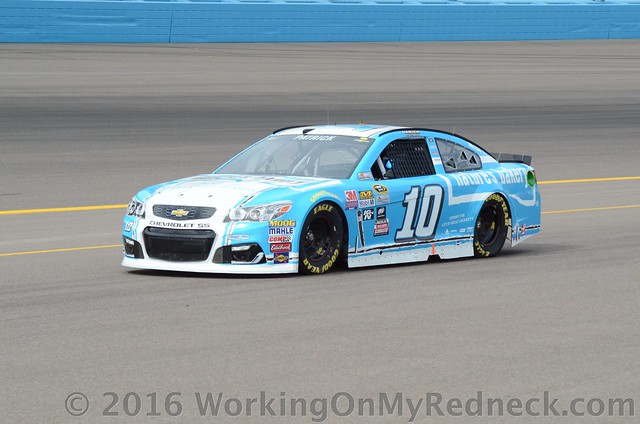 The start of the event was delayed a day due to the impact of Hurricane Matthew, and when the field took the green flag on Sunday afternoon, Patrick lined up in the 13th position. On the initial run she moved up to 11th, but she slipped back to 13th before NASCAR issued the competition caution at lap 25.

On the following run, Patrick dropped to 22nd as she battled a loose-handling racecar. Crew chief Billy Scott tried a variety of fixes on the next couple of pit stops, including wedge and air pressure adjustments, added tape and pulled packer. As the car’s handling began to improve, Patrick moved back inside the top-20.

Patrick went a lap down to the leader at lap 209 in the middle of a long, green-flag run, but when the caution flag waved again at lap 228, she was in position to get the free pass, which put the No. 10 Aspen Dental Chevrolet team back on the lead lap.

In the last quarter of the race, Patrick lost ground during a pit stop under caution when she overshot her stall and had to back up so the team could perform the pit stop. Just after that caution, a multicar incident at lap 258 again brought out the yellow, and Patrick restarted from the 11th position at lap 265. After losing a few positions at the beginning of the run, Patrick was able to work her way back up to 10th by lap 303.

The caution flag waved for the final time at lap 308, and Patrick lined up eighth for the restart. She fell to 12th after taking the green flag but climbed back up to 10th before she was passed by the No. 1 car as she neared the checkered flag. Patrick’s 11th-place finish marks the team’s highest result of the 2016 season.

“The No. 10 Aspen Dental Chevrolet was loose for most of the race,” Patrick said. “Billy and the guys did a great job on adjustments to get us in solid position for the second half. We had a mistake on pit road late in the race and lost some ground when I overshot the pit stall, but the guys quickly recovered and we ended up only losing a couple of spots. The car got a little tight, but they took some wedge back out, and it was pretty good there at the end.

“I was really hoping we’d end up getting a top-10, but (Jamie) McMurray got us on the last lap, so we ended up 11th. Still, I think that’s our best run so far this year, so we’ll take it and try to keep building over the last few races to put ourselves in a better position for next season.”

Kurt Busch, driver of the No. 41 Haas Automation/Monster Energy Chevrolet SS, led the four-car SHR contingent Sunday at Charlotte by finishing eighth. It was his 19th top-10 this season and his 11th top-10 in 33 career Sprint Cup starts at Charlotte.

Tony Stewart, driver of the No. 14 Mobil 1/Rev The Vote Chevrolet SS for SHR, finished ninth to score his eighth top-10 this season and his 14th top-10 in 35 career Sprint Cup starts at Charlotte.

Kevin Harvick, driver of the No. 4 Busch Hunting Chevrolet SS for SHR, led a total of 12 laps in Sunday’s race but finished 38th after being sidelined by mechanical issues after 155 laps.

Busch and Harvick are representing SHR in this year’s Chase for the NASCAR Sprint Cup and after Charlotte – the fourth race of the 10-race Chase – they rank fifth and 12th, respectively, in the Round of 12. Busch leaves Charlotte with a 24-point margin over ninth place. Harvick is 12th, eight points out of the top-eight. Following the sixth race of the Chase at Talladega (Ala.) Superspeedway, only those Chase drivers who have won a race or are among the top-eight in points will advance to the Round of 8.