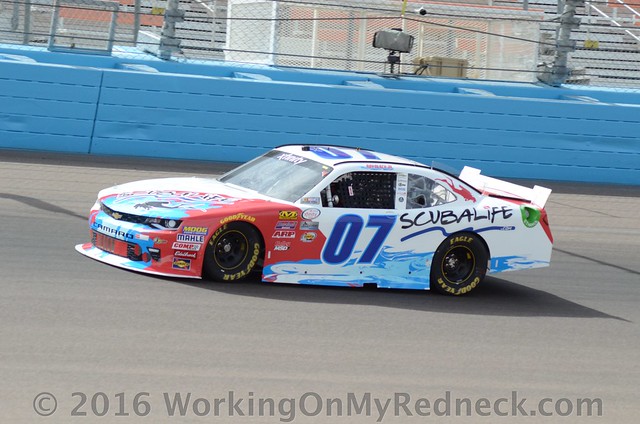 It was another rainy weekend at the track for NASCAR XFINITY Series (NXS) competitor Ray Black Jr., but the driver of the No. 07 ScubaLife.com Chevrolet Camaro went on to grab a 28th place finish in the Drive For the Cure 300 at Charlotte Motor Speedway Sunday afternoon.

Black and his SS Green Light Racing team had two solid practices Thursday at the 1.5-mile track, finishing 17th and 24th. Despite rain cancelling qualifying and postponing the race untilSunday afternoon, the team felt confident that they had a solid car in their hands.

Black would go on to roll off 22nd for the Drive For The Cure 300 based on his average in Thursday’s two practices sessions. Immediately, Black reported the car was extremely loose, to the point where he could barely turn the wheel without it snapping back on him. On Lap 26, Black’s car wheel hopped, causing him to spin out across the track. However, Black managed the spin perfectly and was able to keep the car off the wall and avoid picking up any damage.

As the laps wound down, the team became trapped on their own lap in 28th place. They then decided to make the most of this opportunity and use the remaining laps in the race as a chance to test out some adjustments and strategies they wouldn’t normally get to try in a race situation. After a final pit stop with just over 10 laps to go, Black reported that their adjustments had worked and the car handled great, making the team feel good about the notes they were able to make for the remaining races in this season.

“It was a long race weekend with all the rain in Charlotte, but it was a good one,” said Black. “We were fast in practice, but the track changed so much by the time Sunday’s race rolled around that we were a little bit off in the handling at the start. It wasn’t the finish we wanted, but we were able to take some good notes and try some different things we can use in these final races.”

Fans can keep up with Ray Black Jr. by following him and his sponsor, ScubaLife, on Facebook, Twitter and Instagram at @RayBlackJr and @TeamScubaRacing. Learn more about Ray Black Jr. and Team Scuba by visiting www.rayblackjr.com and www.teamscuba.com.