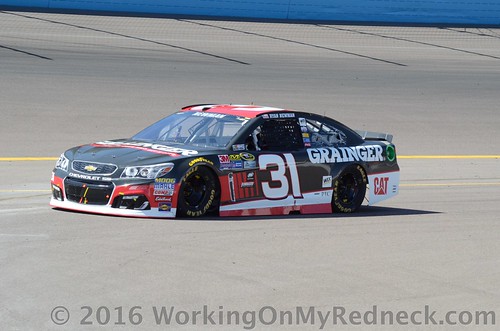 NASCAR Sprint Cup Series veteran Ryan Newman has agreed to a multi-year agreement to remain with Richard Childress Racing (RCR) as the driver of the No. 31 Chevrolet. The renewal marks Newman’s fourth year with RCR and 16th full season in NASCAR’s premier series.

“Ryan’s consistency on the track has been a benefit to our organization and this extension solidifies the future of our racing program,” said Richard Childress, Chairman and CEO of RCR. “Ryan proved the first year he was here that we could contend for championships and with this continuation, I believe we can fulfill our commitment to winning races and a championship. Ryan has worked hard to represent many of our partners, especially the primary sponsors Caterpillar, Grainger and WIX Filters, helping them to get the most out of their respective racing programs.”

Newman’s tenure at RCR with crew chief Luke Lambert boasts two-straight Chase appearances including the 2014 effort that culminated in a single point separating the 38-year-old driver from the coveted Cup title and a career-best finish in the Cup point standings. Entering this weekend’s Cup race at Kansas Speedway, Newman and his No. 31 team have accumulated 11 top-five, 39 top-10 and 65 top-15 finishes in 102 starts.

“I am pleased to continue driving for Richard Childress Racing,” said Newman. “Our goal to win a championship all but turned into a reality during our first year together. I feel like since then, we have some unfinished business to complete. I’m fortunate to have forged a great relationship with my crew chief Luke Lambert, and I very much want to not only help him reach our goal of winning a Cup championship but also getting him his first Cup victory.”

Before joining RCR, the South Bend, Indiana native’s Cup career spans 17 years and over 540 races totaling 17 victories including the 50th Daytona 500 at Daytona International Speedway in 2008 and the 2013 Brickyard 400.

I don’t think that we all saw this coming.  It seemed very obvious that Newman was on his way out of RCR in order to make room for Richard Childress’ other grandson, Ty Dillon, into the RCR stable for 2017.  With this announcement of extending Newman’s contract, there will be another announcement coming from RCR as to what team that he will put Ty.

There is some rumors out there that Ty Dillon may be the new driver in 2017 of the Germain Racing No. 13, who has an alliance with RCR!