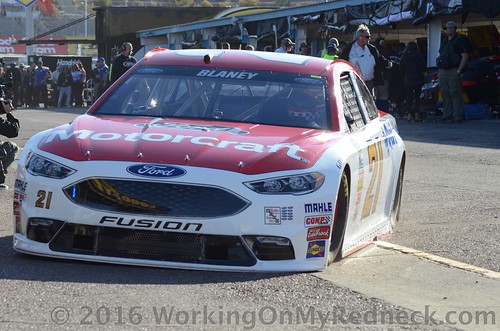 JOLIET, Ill., September, 18, 2016 – A late-race pit strategy gamble put Ryan Blaney and the Motorcraft/Quick Lane Ford Fusion in position to win the Teenage Mutant Ninja Turtle 400 at Chicagoland Speedway in overtime, but cars with newer tires passed the Wood Brothers’ rookie on the last re-start and he ended up with a very strong fourth place.

“We were just trying to hold those guys off,” said a smiling Blaney after he climbed out of his race car. “I was hoping a couple more cars stayed out than that but it was worth a shot and we came home with a better finish than we would have otherwise.

“We weren’t in contention for the win all race,” Blaney continued. “We were fast, don’t get me wrong, we were probably a fifth- to eighth-place car. The last caution came out and we were seventh and thought that’s where we’d end up. Staying out was worth a shot. We had nothing to lose. Why not do it? If two more cars stayed out, we might have had a better shot.”

Blaney’s day began 22nd on the starting grid due to qualifying being rained out on Friday. He launched into the top 15 during the first lap, cracked the top 12 at the race’s half-way point, moved into the top 10 during lap 151 and became a top-five car with 31 of 267 laps to go.

He assumed the lead of the race on lap 240, his first laps led in Sprint Cup, before pitting for the final time. He grabbed the lead again when the yellow flag was thrown for debris on the track during lap 263 and the six cars ahead of him went to pit road.

“I thought we had a shot but those guys on new tires were so fast,” Blaney said when asked how he felt about leading the race.

The call to stay out during the last caution fell to crew chief Jeremy Bullins. “That was a good day for us,” he said. “We had a fast car all day. We had to overcome some stuff to get back to the front. It was worth a shot.”

Among the challenges the team faced were a car that didn’t handle well in traffic early in the race and a couple of pit miscues.

“We got it better,” Blaney said of the handling issue. “It also gets better the farther you get up in the field.

“It was a long day for us for sure,” he said. “We passed a lot of cars. We started 22nd and worked on the car all day. The gamble paid off since we finished a little bit better than we were going to. That’s a true testament to this team. We didn’t start off great but worked on the car all day. Taking a risk like that. Sometimes they don’t pay off. This one did. It was a good run for us. Hopefully we can do something like that in the next 10 weeks.”

The finish is Blaney’s eighth top-10 of the 2016 NASCAR Sprint Cup season.

Although Blaney is not in the Chase for the NASCAR Sprint Cup, he moved up from 21st to 19th in the driver points standings. The next race on the schedule is the New England 300 at New Hampshire Motor Speedway on Sunday, Sept. 25.

Ford’s Quick Lane Tire & Auto Center offers routine vehicle maintenance such as oil and filter changes, light repair services including brake repair, and tire replacements on all vehicle makes and models. With nearly 800 locations and growing, customers can visit  www.quicklane.com to find a center that is closest to them, print savings coupons and review maintenance tips to keep their vehicles running at peak efficiency. This site includes information on how to spot tire wear, how to jump-start a battery and even a series of tips to improve a vehicle’s fuel economy.

Wood Brothers Racing was formed in 1950 in Stuart, Va., by Hall of Famer Glen Wood.  Wood Brothers Racing is the oldest active team and one of the winningest teams in NASCAR history. Since its founding, the team won 98 races (including at least one race in every decade for the last seven decades) and 117 poles in NASCA’s top-tier series. Fielding only Ford products for its entire history, the Wood Brothers own the longest association of any motorsports team with a single manufacturer. Glen’s brother, Leonard, is known for inventing the modern pit stop.  The team currently runs the Motorcraft/Quick Lane Ford Fusion driven by Ryan Blaney in the famous number 21 racecar.