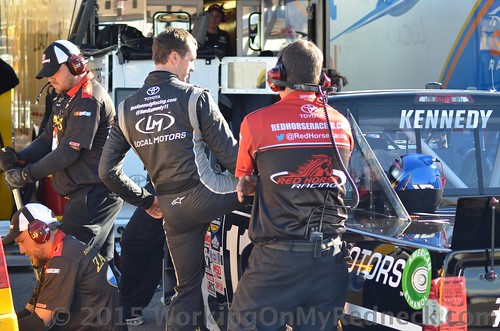 Ben Kennedy, driver of the No. 33 Weber Grills Chevrolet Silverado, earned a 26th-place finish in Friday night’s American Ethanol e15 225 at Chicagoland Speedway. Kennedy started from the sixth position for the 150-lap event and entered the top five on the first lap. The No. 33 spent the first 105 laps within the top 10 and Kennedy reported he was very happy with the handling of his Chevrolet. On lap 106, the Weber Grills Chevrolet received fuel only and was the first truck off pit road, claiming the lead position and control of the restart. Kennedy led for a total of four laps before being shuffled back on old tires. On lap 113, Kennedy was sent spinning following contact from a competitor. As he saved the truck from contact with the wall, two trucks struck him, ending the No. 33 team’s night.

By virtue of earning his first NCWTS win at Bristol Motor Speedway in August, Kennedy has secured a position in the Inaugural NCWTS Chase Class. Kennedy will start the Chase as the sixth-seeded driver in the championship point standings. The Chase begins at with the first event in the Round of Eight at New Hampshire Motor Speedway on September 24. Following the race at Talladega Superspeedway on October 22, the top six drivers will move on to the Round of Six. Four drivers will race for the Championship in the season finale at Homestead-Miami Speedway.

BEN KENNEDY QUOTE:
“The Weber Grills Chevrolet was so fast tonight. I don’t know what we could have done different to make sure we were up there at the end. It felt good to lead and I think that was confirmation for our team that we can compete for a win every week. This team is ready for the Chase and that’s all I can ask for. We’ll show up to New Hampshire next week ready to punch our ticket to the Round of Six with a win.”