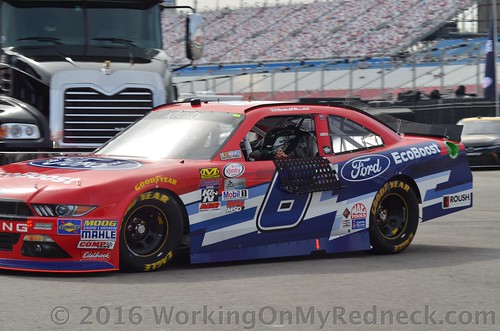 Darrell Wallace, Jr., aka Bubba Wallace, driver of the No. 6 “Shredder” TMNT Ford Mustang, recorded a 20th-place finish in the NASCAR XFINITY Series event at Chicagoland Speedway in the final race of the 2016 regular season.

“We’re going to go to Kentucky and be ready to go for this Chase,” said Wallace after the race. “Today we just fought a really loose Mustang but we’re excited to get going in this inaugural Chase in the XFINITY Series. We’ve got two really good tracks coming up in Kentucky and my favorite track in Dover. This is a complete reset now and I know my guys will give it everything they have to go for this championship.”

Wallace took the green flag for the 200-Lap event from the 15th position after advancing to the second round of knockout qualifying on Saturdaymorning. Wallace maintained his top-15 track position throughout the first run of the race, reporting to crew chief Seth Barbour that the “Shredder” TMNT Mustang was very loose through the corners. Barbour then utilized a Lap 25 competition caution to bring Wallace to pit road for four tires and a chassis adjustment.

Unfortunately, Wallace was caught speeding on pit road following the stop and was forced to take the ensuing restart from the tail end of the field. Despite the setback Wallace charged forward, improving 10 positions in the first two laps after the restart and up to as high as 13th before the loose-handling condition returned.

Wallace continued to fight for position until an inopportune caution following the first round of green flag pit stops on Lap 82 trapped the Roush Fenway Racing driver a lap down. Although off of the lead lap Wallace battled for every position he could in an attempt to get into the free pass position. However, another speeding penalty following a green flag pit stop on Lap 152 forced Wallace to serve a pass-thru penalty under green.

Wallace returned to the track following the penalty in 22nd but raced his way back into the top 20 in the closing stages, taking the checkered flag in the 20th position.

Wallace heads into the first round of the NASCAR XFINITY Series Chase as the No. 6 Seed.

Next up for the NASCAR XFINITY Series is Chase Race No. 1 at Kentucky Speedway on Saturday, September 24 at 8:00pm EST.