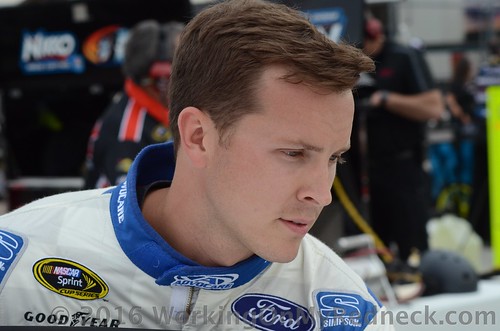 “That caution during green flag pit stops really didn’t help us,” said Bayne after the race. “It trapped us down a lap and made it really tough to make up the track position. We just needed some help on our short-run with this AdvoCare Ford. But I want to thank these guys for all their hard work. We’ll shake this one off and get ready to go to Loudon next weekend.”

Bayne began the scheduled 267-Lap event from the 20th position after the field was set by owner points, per the NASCAR Rulebook, due to rain cancelling qualifying on Friday afternoon. In the early stages Bayne charged forward, improving six positions in the opening lap and up to as high as 14thdespite a tight-handling condition through the corners. Crew chief Matt Puccia planned to make adjustments during the first round of green flag pit stops on Lap 48 but an inopportune caution while Bayne was on pit road trapped the Roush Fenway Racing driver a lap down, costing the team valuable track position.

The Knoxville, Tenn. native took the ensuing restart from the 25th position and continued to fight for position in the hopes of being the first car one-lap-down throughout much of the middle portion of the event. However, the tight-handling condition persisted, affecting Bayne’s ability to make up ground on the short-run.

In the closing stages, Bayne would utilize a green-white-checkered restart to race his way by Roush Fenway teammate Ricky Stenhouse Jr. and Danica Patrick to record a 23rd-place finish.

Next up for the NSCS in New Hampshire Motor Speedway on Sunday, Sept. 25.