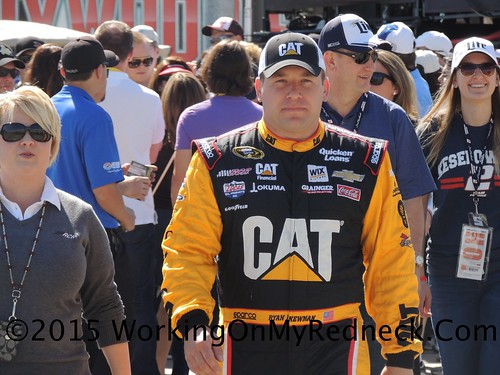 However, Ryan Newman, in his third season as driver of the No. 31 RCR Chevrolet, isn’t quite sure if he’ll be a part of it.

“We haven’t talked about it in-depth yet, but we have talked about it,” Newman, 13th in points, said Thursday at Kalahari Resort in Pocono Manor, Pennsylvania. “Hopefully, we’ll get to sit down and talk about it soon.”

Newman has been arguably the organization’s most successful driver during his tenure with the longtime Sprint Cup Series stable, coming within a straightaway of his first championship in 2014 at Homestead-Miami Speedway.

His numbers are down slightly from the past two seasons (just one top-five finish and seven finishes in the top 10), but his team, winless since he started driving the No. 31 Chevrolet, employs a consistent points-racing strategy that focuses on solid finishes rather than gambling for a victory.

It worked wonders in ’14, and with 12 finishes inside the top 15 this season and several more on the cusp, appears to be working in 2016. He sits 13th in the drivers points standings coming into Pocono. That doesn’t mean, however, that NASCAR’s “Rocket Man” isn’t looking to launch himself into Victory Lane.

“We’re kind of getting back into that zone of having better finishes, better runs,” Newman said. “We had a great run going last week (at Indianapolis) and crashed out with seven laps to go or whatever. So we feel like we’ve turned the momentum back in our favor but in the end we still have to deliver that victory.”

While Newman offers consistent, above-average production week in and week out, RCR may be faced with a tough decision as Childress’ grandson, Ty Dillon, appears ready for a full-time Sprint Cup Series ride with no clear path to a spot for him.

Still, the team owner told NASCAR.com earlier this year at Michigan International Speedway that he’s planning on having the ’16 XFINITY Series title hopeful in a Sprint Cup car full-time in 2017, while the exact organization and ride has yet to be finalized.

Dillon has made five starts in the No. 95 Circle Sport-Leavine Family Racing Chevrolet this season with a best finish of 20th (Texas). It’s possible Dillon could slide over to that ride full-time, but it would leave veteran Michael McDowell without a seat.

Dillon also ran three Sprint Cup Series races filling in for injured Tony Stewart in the No. 14 Stewart-Haas Racing Chevrolet, getting his season-best finish of 15th at Phoenix. His relief duty in the Talladega race was not credited as an official start for Dillon since Stewart began the race behind the wheel.

Right now, Newman doesn’t appear to be getting his ducks in order just yet on the off chance he finds himself ousted from his ride in favor of the younger Dillon.

Looking at 2017 realistically for RCR there are a couple of truths that seem to be self evident.  It is a fact Paul Menard will have a ride in the RCR No. 27 Chevy for as long as he wants it, and as long as his dad, Menard’s Founder John Mendard, is willing to right the big check to Richard Childress.

Lastly, Childress is absolutely going to put his other grandson, Ty Dilon, in a Sprint Cup ride, most likely within his organization. That leaves Ryan Newman, the driver of the third race team at RCR, the odd man out of this equation!

I just don’t see it any other way!