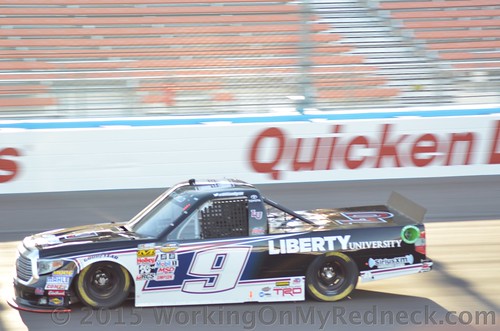 Then again, the race didn’t need any representation from NASCAR’s top division, as William Byron dominated and showed them all the fast way around Pocono Raceway.

The 18-year-old from Charlotte, N.C., led 44 of 60 laps in the No. 9 Kyle Busch Motorsports Toyota in a caution-filled event and pulled away to beat runner-up Cameron Haley to the finish line by a comfortable 1.407 seconds. The victory was the fifth in 12th starts this year for the first-year driver, who broke Kurt Busch’s rookie record of four wins in 2000.

“That 9 is so fast,” commented Haley. “We need to really go back and look at things, because he’s definitely a step above us. But we worked hard all day, and we were able to come out at least for a second-place finish.

“We would have liked to win, but that 9 is pretty fast, so we’ll keep trying.”

Byron had his sights set on the rookie record from the outset.

“It means a lot,” said Byron, who pitted for fuel for the last time on Lap 25 and spent the rest of the race saving gas. “It was definitely a goal—I can’t lie about that. I knew that was something to beat, and we just show up with so much focus.

“We never get off track, I feel like. It’s just a credit to where we are as a race team, the work we’re doing, the work they’re doing in the shop on the trucks, and we’re putting it all together when we get to the race track.”

Byron’s wasn’t the only mark set on Saturday. The race produced a record nine cautions for 27 laps, and the spate of yellow flags allowed both Byron and Haley to get 35 laps out of their last tanks of fuel.

Christopher Bell, the victim of an early wreck when John Wes Townley knocked his No. 4 Tundra into the outside wall, lost five laps under repairs, but Bell received a series-record five free passes under caution as the highest-scored lapped truck and returned to the lead lap in time for the final restart on Lap 57.

“I was just out there trying to log laps,” Bell said. “And the next thing you know, there was a yellow. Then there was another yellow, and they said, ‘You’re the lucky dog, come on around.’ The last yellow put us on the lead lap, and we were able to capitalize on it.

“To come out of here with a top 10 was remarkable for us.”

Byron increased his lead in the series standings to 25 points over second-place Matt Crafton, who finished 12th on Saturday. Daniel Hemric, who spun and collected Brad Keselowski Racing teammate Tyler Reddick to cause the fifth caution, is tied with Peters for third in the standings, 37 points behind Byron.

Check out the unofficial results of the Pocono Mountains 150.

TIL NEXT TIME, I AM STILL WORKING ON MMY REDNECK!