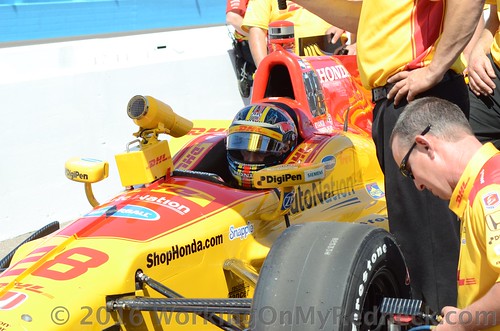 “We’ve been talking to Watkins Glen about Labor Day and if we can figure out how to do it and be respectful to the Ferrari group, we’d be thrilled to go back to a place with such history,” said Miles on Monday evening. “We think there’s a strong IndyCar fan base and if we can work things out, we can move on this pretty quickly.”

The “Ferrari group” Miles referenced is a traditional club racing event already scheduled for that weekend, but Miles sounded hopeful they and IndyCar could share the 3.4-mile road course.

With the Boston street race canceled last week, IndyCar looked for a replacement for Sept. 2-3-4 and the only two logical candidates seemed to be Gateway in Madison, Ill., or the famed track in Seneca Lake, New York that first hosted Indy cars in 1979 but haven’t been back since 2009.

As for booking The Glen going forward into 2017, Miles said: “You want it to be successful and, if so, it makes sense to try and stay there.”

The last IndyCar race took place on July 4, 2009 and had a dismal turnout.

As the race fans have figured out, IndyCar racing really has a very lack-luster turn out at the race tracks, with the exception of the Indy 500.  I was at the Phoenix race in April and I would estimate that there were maybe 10-15,000 fans in the grandstands at the max.  It is very fortunate that the Indy 500 sells out each year and that the TV contract gives IndyCar a lot of money.

If IndyCar had to rely on the turnstile at the race tracks for financial support their demise would happen very quickly! So it makes no sense that IndyCar would concern themselves with the previous dismal turnout at The Glen.  IndyCar will never sellout an oval race track with the exception of the Indy 500.

Nevertheless, I would welcome IndyCar attacking the road course at Watkins Glen.