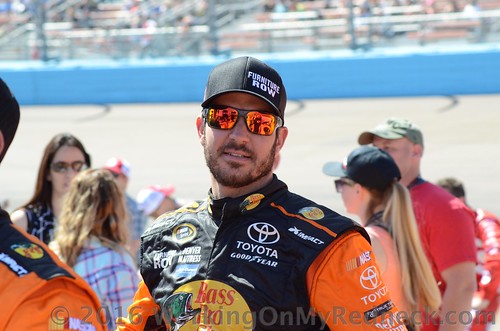 “I don’t know what the racing gods have against me,” Truex told the team over the radio. “But boy, that sucks.”

At the time, Truex was smarting from the sort of calamity that had derailed his efforts in the past. He had pitted on Lap 212, then realized something was wrong. He felt a loose wheel. Later he learned a bolt sheared off behind the wheel, preventing the tire from mounting properly.

A few years ago, a gut punch such as the one Truex endured on Saturday would have lingered well beyond the weekend. But since joining Furniture Row Racing in 2014 — and witnessing his long-time partner Sherry Pollex begin her battle ovarian cancer just eight months later — Truex approaches life differently.

“Everything you go through in life has to do with changing how you are and making who you are and certainly going through what we did changed me a lot.”

As Pollex rebounded, so did Truex. FRR owner Barney Visser assured Truex in 2014 that the team was behind him. Last year Truex responded with his career-best Cup season, which culminated in a fourth-place finish in the standings — also a career-high for Furniture Row Racing.

While Truex has yet to win in 2016, this weekend NASCAR returns to Dover International Speedway the site of Truex’s first career Cup win in 2007. And yes, that was the only race Truex led more than 100 laps (216) and went on to win at his home track.

Since joining FRR, Truex has enjoyed competitive cars in more races than not. He continues to build on the consistency under the direction of crew chief Cole Pearn, who started his second season overseeing the No. 78 team. This year alone, he’s already led 370 laps in the first 11 races. Despite the tremendous success the team had last year, Truex total laps led were 567 in 36 events.

Not surprisingly, Truex would like to remain in the No. 78 FRR car “for a long time.” Last year, Truex extended his contract through 2016 but he hopes to continue building a successful relationship with the Denver-based team beyond this season. When would he like renegotiate?

“Right now,” Truex said with a chuckle. “The problem I’ve had with my career is it’s been up and down. And that’s because of change. That’s because you get in situations where they don’t go the way you thought they were going to go.

“DEI (Dale Earnhardt Inc.) fell apart. I stayed there too long. It was a tough situation. You look at Jimmie Johnson. You look at Denny Hamlin, Kyle Busch. They get with a team and they just keep building on that foundation. Year in, year out, they’re the guys to beat because they have that around them. They have that solid — just rock. They can build on things and look at past history . All they have is the car and the rule changes and those kind of things. They don’t have to figure out everything else that goes along with it.”

Truex won two Xfinity Series titles with DEI and dabbled with their Cup program prior to graduating to NASCAR’s top tour full-time in 2006. When DEI merged with Chip Ganassi’s program in 2009, he stayed the course before joining Michael Waltrip Racing in 2010. Although he left MWR at the end of 2013 — and before the organization’s ultimate demise last year — Truex, 36, understands FRR has the potential to blossom into a perennial contender.

“With Cole and those guys, it’s something special and it’s something I’d like to keep going for a long, long time,” Truex said. “To get where I want to get in the sport, that’s what you have to have. Hopefully, we can make it work.”

Through all the ups and downs in his career and personal life Truex has not only grown as a driver, but most importantly as a human being.  It also appears that FRR to has grown dynamically as an organization as well, especially now that they has aligned itself with one of the hottest race teams in the Sprint Cup Series this year, Joe Gibbs Racing.  There is no doubt that FRR will win at least one race this season, maybe more!