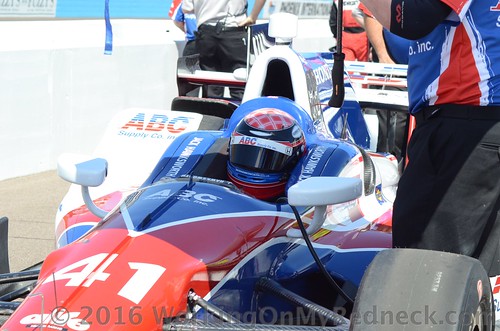 From the beginning of his career in the Verizon IndyCar Series, it never took Jack Hawksworth long to show his speed.

The Briton, driving in his rookie campaign for Bryan Herta Autosport in 2014, made the Firestone Fast Six in just his second race. Two races later, Hawksworth qualified second for the inaugural Angie’s List Grand Prix of Indianapolis on the Indianapolis Motor Speedway road course. The race served as a coming-out party for Hawksworth, who led a race-high 31 laps en route to a seventh-place finish, putting the series on notice that the British rookie was one to reckon with.

Hawksworth found a new home at AJ Foyt Racing last year, driving the No. 41 ABC Supply Honda, and returned to the Foyt camp for 2016. Despite showing the same speed that brought him notoriety in 2014, Hawksworth has yet to post a top-10 finish through four races this season.

“The speed has shown and we’ve handled the big things really well,” said Hawksworth, “but the small things make a big difference and it has hurt our results on some days. Certainly it hasn’t been a great start to the season, but the potential of this team is massive.”

That has “The Hawk” in a positive mindset heading into the third annual Angie’s List Grand Prix set for a week from today. Part of his enthusiasm comes from a recent change made within the team. At the Honda Indy Grand Prix of Alabama race weekend April 22-24, Daniele Cucchiaroni was promoted to lead engineer on Hawksworth’s car, adding depth to an already successful relationship.

“We’ve always worked well together since my rookie year and we see eye to eye,” Hawksworth said. “I have a lot of faith in him and I think he’ll do a fantastic job for us on the No. 41 ABC Supply car.”

The pair’s first weekend together started strong, pacing the second practice at Barber, but ultimately ended with a 19th-place race finish. But as Hawksworth and Cucchiaroni look ahead, their next challenge comes at the track where they found their breakthrough two years ago.

“I like the (IMS road course) track a lot,” Hawksworth admitted. “Obviously it’s Indy, so it’s a big deal. I had a strong showing in 2014 and we very well could have won that race. I also won the LMPC sports car race on the same track a few months later, so I’ve had quite a bit of success there.”

Hawksworth was quick to recognize the Angie’s List Grand Prix’s importance, not just for its own race, but for the one that follows, the 100th Running of the Indianapolis 500 presented by PennGrade Motor Oil.

“Obviously (the grand prix) kicks off the month of May for us and that’s a big deal. I just really like the event. The fans get to come out and see our cars in road course trim before we get out on the oval, which is unique to our series.”

After a tough start to the 2016 season, Hawksworth remains optimistic and focused on bringing in big results. And no place is better for that surge to begin than Indianapolis.

“We certainly hope the Angie’s List Grand Prix will serve as a springboard for us through the rest of the season,” Hawksworth said. “We’ve refocused, we’re ready to get back to it and I’m sure the No. 41 car will be competitive out of the gate. For all intents and purposes, our season starts at Indy!”

Next weekend will mark the Angie’s List Grand Prix of Indianapolis and the two weeks of speed at IMS.