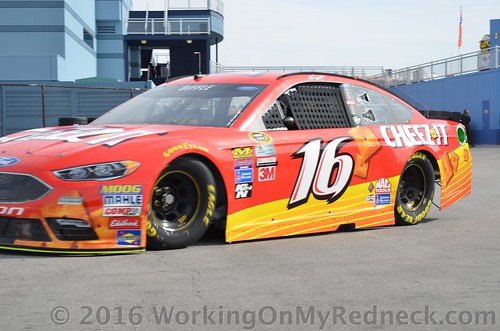 Greg Biffle drove his No. 16 Cheez-it Ford Fusion to a 14th-place finish in Sunday’s NASCAR Sprint Cup race at Richmond International Speedway.  Biffle started 19th due to rain washing out qualifying, but steadily advanced through the field and was poised to crack the top 10 until getting shuffled back on the final restarts.

“We certainly didn’t end up where we were running,” said Biffle.  “We were running mostly around 11th or 12th most of the day and the last couple of restarts we got shuffled back.  That happens though.  I guess that is racing.  I wish we were better than that but we definitely had a better car than 14thwhich makes you feel good.”

Rain plagued all track activity Friday at Richmond.  The field got limited practice as the rains came in and stayed.  NASCAR was forced to cancel qualifying and set the field based on the rain shortened practice, lining Biffle up 19th in the  No. 16 Cheez-it Ford Fusion.

The race kicked off with a long green flag run for the field.  Biffle steadily advanced and was up to 13th by the first scheduled pit stop for four tires and fuel.  Biffle didn’t report back on handling until the first caution of the day came out over 150 laps in for debris.  He needed to turn better, so he visited for pit road for four tires, fuel and a left rear wedge adjustment.

The adjustments made the Cheez-it Ford extremely loose, causing the team to go back on the wedge adjustment at their next opportunity.  From there just a slight air pressure adjustment was all Biffle needed as the race winded down.

As the race approached the scheduled distance multiple cautions came out, for what had been a fairly caution free race.  Biffle got shuffled back on the restarts, but was able to work his way forward to earn a 14th-place finish.

Next week Biffle and the rest of the RFR No. 16 Ford team will be unloading at Talladega.