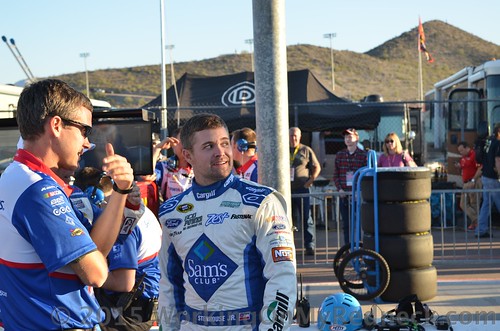 After running consistently in the top-10 for a majority of Sunday’s NASCAR Sprint Cup Series (NSCS) race at Richmond International Raceway, Ricky Stenhouse Jr. felt a vibration on his Fifth Third Ford  which forced him to pit under green flag conditions forcing him to settle with a 26th-place finish.

“Our Fifth Third Ford was one the fastest cars on the track late in the runs, but we struggled on the short runs,” Stenhouse said. “Our finish definitely didn’t reflect on where we ran for a majority of the race. Hopefully we can get rid of this bad luck soon.”

Because of the rain qualifying was rained out on Friday, the two-time NASCAR XFINITY Champion started the 400-lap race in the 12thposition after being 12th overall fastest in practice on Friday.

As the early stages of the race unfolded Stenhouse lost a few positions, the Olive Branch, Miss. native worked his way inside the top-10 by lap 48 and inside the top-five by lap 90.

After a pit stop under caution, Stenhouse Jr. felt a vibration forcing him to bring his Ford to pit road under green flag conditions, ultimately costing him two laps to the leaders.

With several cautions in the second half of the race, the 2013 NSCS Rookie of the Year was able to take the wave around to get back on the lead lap. With the final 40 laps staying green, Stenhouse was forced to settle with a 26th-place finish.

Next week Stenhouse and the Roush-Fenway Racing No.17 Ford Fusion team will travel to and unload at Talladega, baby!