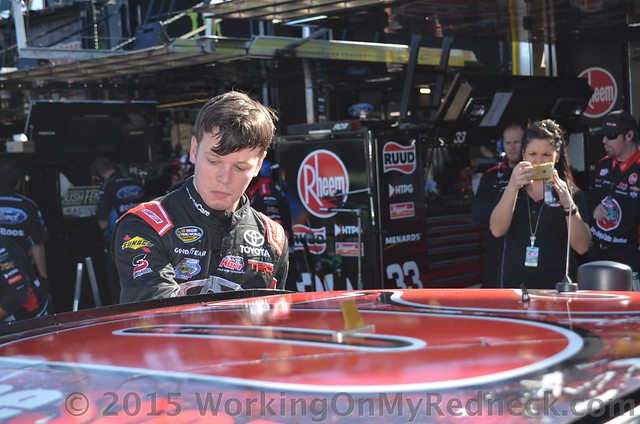 The nineteen year old Joe Gibbs Racing phenom, Erik Jones, is the first XFINITY Series regular driver to win a race this year. Not only did Jones win the Fitzgerald Glider Kits 300, not only did he claim the XFINITY Series first payout of the $100,000 Dash 4 Cash (show me the money!), but most importantly, he secured his spot in the XFINITY Series championship Chase format!

This week at Bristol there was a new format introduced to the NXS race, The Dash 4 Cash heat races.

After qualifying there were two 50 lap heat races to determine the starting postion for the 200 lap  feature race.  The odd numbered qualifiers raced in the first heat race and the even numbered qualifiers raced inthe second heat race.  The results of the first heat race determined the starting order for the inside line and the results of the second heat race determined the order of the outside line.

The whole race this afternoon hedged on the final restart with three laps remaining, where Jones started fourth and surged to victory Saturday in the NASCAR XFINITY Series at Bristol Motor Speedway, pocketing the big money bonus as part of the series’ Dash 4 Cash promotion.

Jones wheeled his Joe Gibbs Racing No. 20 Toyota past Kyle Larson’s No. 42 Chevrolet in the 198th of 200 laps, then held off a charging Kyle Busch by .419 seconds at the checkered flag. His win in the Fitzgerald Glider Kits 300  was his first XFINITY triumph of the season, his first Bristol win in the series, and the third of his brief XFINITY career.

Jones’ rally denied Busch and Larson, who put on a stirring, lead-swapping show throughout the middle and latter portions of the feature, but both faltered on the final restart.

Busch led 43 laps and wound up second, while Larson was in front a race-high 94 laps and wound up third.  As is the case from time to time, the most dominate race cars do not always lead the race on the lap that counts, the last lap!