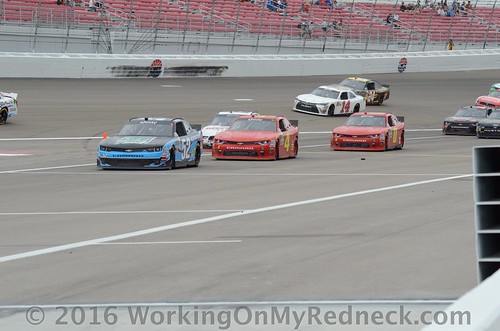 Ross Chastain had one of his best days of the Xfinity Series season Saturday at Bristol Motor Speedway.

Chastain did not sit on the front porch, but in fact he ran with the big dogs Saturday morning in qualifying for the Fitzgerald Glider Kits 300. He had the day’s 11th fastest run in the final round of qualifying, outgunning such drivers as Kevin Harvick, Darrell Wallace Jr. and Elliott Sadler.

Chastain started 21st in the race, however, because the starting lineup was determined by finish positions in a pair of 50-lap heat races, a new element added to some Xfinity races this year. He finished 11th in his heat.

Chastain finished 22nd in the main event and jumped three spots in the Xfinity driver standings to 13th.

“All in all, not a bad day,” Chastain said. “We would have liked a better finish in the race, but we showed a little of what we can do in qualifying and then brought the car home solidly. It was a good short-track effort for the team.”

Meanwhile Chastain’s teammate, Garrett Smithley, had driven on the Bristol Motor Speedway surface prior to Saturday’s Fitzgerald Glider Kits 300, but never in competition.

His Xfinity Series debut Saturday resulted in a 29th-place finish for Chastain after he started 30th.

Smithley finished 15th in a 50-lap heat race that was held before the 200-lap main event to set the grid for the feature.

“I didn’t have a real good idea what to expect for my first time here, and it was a fun place to drive,” Smithley said. “You get around the place so fast that you barely have time to think about the next lap. I was happy we could finish the race with a clean car.”

The series rolls on to Richmond International Raceway in Virginia for an April 23 race.