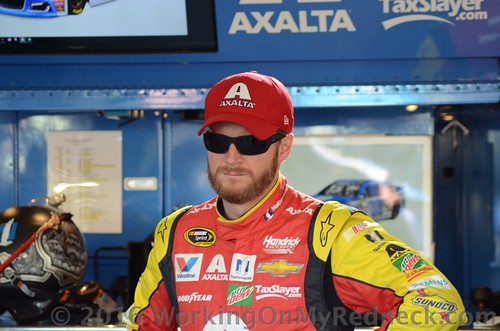 In a major announcement, following in the footsteps of many NFL players and extreme sports athletes, Dale Earnhardt Jr. said Saturday he plans to donate his brain for concussion research.

It’s a monumentally major announcement, because Earnhardt is NASCAR’s most popular driver — and has been the past 13 years!

Earnhardt, 41, like many veteran NASCAR drivers, is no stranger to hard crashes and head injuries similar to what football players endured before being diagnosed with Chronic Traumatic Encephalopathy post-mortem.

In 2002, Earnhardt received a concussion in the Fontana race in April, however he did not disclose the injury until September while continuing to race. Fast forward ten years later, Earnhardt had two concussions in six weeks, one he self-diagnosed at a tire test in Kansas and another after a big crash at Talladega. Afterward, he voluntarily went to a doctor for an evaluation and had to sit out two Chase races in October because of the injury.

While Earnhardt shows no ill effects of the concussions thanks to NASCAR’s improved safety, other drivers aren’t so lucky. Hall of Famer Fred Lorenzen was found to have dementia in 2009 along with short-term memory loss. His family has met with NASCAR officials to discuss his declining health.

Lorenzen is an example of drivers that might have endured pain to repeated head injuries in a race car at a time when barrier-softening technology was non-existent as cars crashed head-on into concrete walls at high speeds. Most people who navigate here would have suffered knee and joint pain from long-distance driving. Racecar drivers are at a higher risk of pain and injuries.

Last year, J.D. Gibbs, president of Joe Gibbs Racing and son of the Hall of Fame football coach, began treatment for symptoms affecting his speech and brain function that might have stemmed from playing football and participating in racing and extreme sports. The younger Gibbs is no longer running the team’s day-to-day operations and very rarely appears at the track.

Both NASCAR and the drivers must coordinate and commit to a joint effort to continue to make racing a safer sport.  Granted safety is a continuously moving target and can never be completely satisfied, nevertheless, the commitment must be there by both parties!