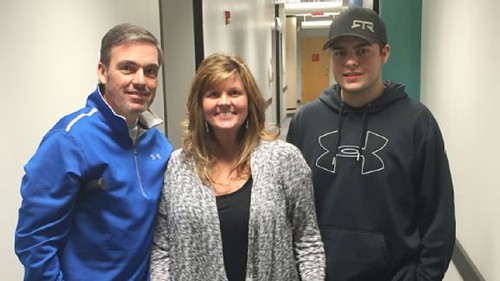 Matt Kenseth’s spotter Chris Osborne will return to the track this weekend to spot for Daniel Suarez in Saturday’s Camping World Truck Series race at the Martinsville Speedway. Then on Sunday he will resume his position as the spotter for No.20 Matt Kenseth during the STP 500. His appearances there are a personal triumph after he and his family nearly lost their lives in a devastating car crash a week before Christmas.

According to reports, On December 17, 2016, Chris and his son Austin were riding in the front if their cars when a (alleged) drunk driver slammed into them head-on at 60 mph near their home in Sophia, NC. The accident left Chris with a shattered right leg, requiring 25 screws to hold a rod and plates in place, while his son suffered a partially collapsed lung, a bruised sternum, a concussion, a broken nose, a bruised shoulder and he lost a couple of teeth. However, it was Melissa (Chris’s wife), who was riding in the rear who endured the most severe injuries. She sustained a broken shoulder, 9 broken ribs, a broken hip, broken pelvis and broken right elbow that all required reconstructive surgery and significant recovery and rehabilitation.

Although Chris is still wearing an air cast and needs to walk with the aid of a cane, he was cleared by his medical team two weeks ago to return to his work duties with Joe Gibbs Racing. His return to the spotter stand comes just as the driver who hit him is due to appear in court to face DUI charges for the 3rd time since 2006.