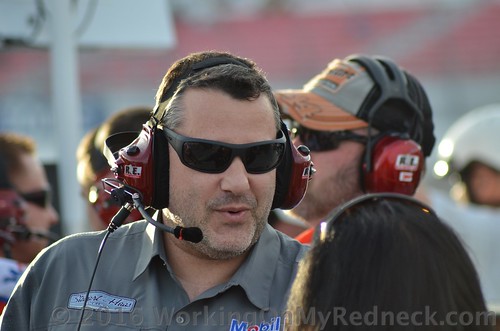 Chevrolet’s director of motorsports competition, Mark Kent, has described Ford’s joining forces with Stewart-Haas Racing in 2017 as “a bold move”, but he has pledged support for SHR til the end of 2016.

Kent also has said that, “Ford hasn’t won a drivers’ or manufacturers’ championship in over a decade. So obviously they’ve been looking at Chevrolet and realizing it takes great teams and great depth to be able to win championships.”

“We’ve been able to win the last 13 manufacturers’ titles and nine of the last 11 drivers’ championships.  Therefore, Ford realized they had to do something. They made a bold move.”

Haas CNC Racing, as it was known when formed by Gene Haas in 2003, has always been a GM team, and since Tony Stewart joined as driver and co-owner in 2009, the rebranded Stewart-Haas Racing has achieved 31 wins.

The high points for SHR have been Stewart winning the NASCAR Sprint Cup in 2011 and Kevin Harvick – the current points leader – clinching the 2014 title.

But late last month SHR caught everyone completely by surprise when they announced it was to switch from Chevrolet to Ford, starting next season.

While Kent acknowledged the achievements of SHR, he stated that the team’s use of Hendrick Motorsports equipment had also made the team extremely susceptible to outside offers.

“But they have been a great partner for Chevrolet and a great performer for the brand, and so for 2016, our focus is to continue supplying Stewart-Haas with the equipment to continue winning races and fighting for championships.”

As the season wears on it will be extremely interesting to see if Stewart-Haas Racing will still be as competitive as they have been for the last couple of years.  The real proof in the pudding will be watching Kevin Harvick and the No. 4 team.

For the last 2+ years, since Harvick joined SHR, that team has been the most consistent and competitive team at the track week in and week out!  At some point this season, as SHR begins to turn their attention from Chevy to Ford and begin building there own cars and coordinating more things with Ford and receiving less and less data from Chevrolet, there could obviously be a  change in the status of SHR.

I would think that by late summer, or for sure by the start of The Chase, there may be a huge difference in the over-all competitiveness of SHR as the transition from Chevy to Ford for 2017.  At some point Hendrick Motorsport will have to cutoff SHR from their technical support and that will drastically affect Stewart-Haas Racing’s overall performance for this year.

After mulling this switch by SHR for 2017 you really have to hand it to Ford!  They have pulled off a grand coup in the NASCAR world, keeping it all under wraps until SHR dropped the bomb on the whole of NASCAR!