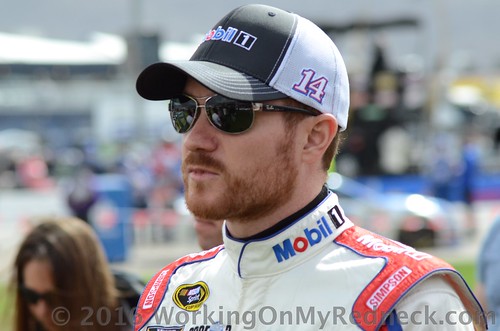 The race to land one of the most coveted open seats for the Indy 500 is winding down as a NASCAR driver, an Indy veteran, a new team, and the most recent Rookie of the Year chase the third Schmidt Peterson Motorsports entry.

RACER has learned that current Stewart-Haas Racing Sprint cup driver Brian Vickers, who is filling in for the injured Tony Stewart, nine-time Indy 500 starter Townsend Bell, the new Grace Autosport team, and 2015 Verizon IndyCar Series/Indy 500 Rookie of The Year, Gabby Chavez, are in the running for SPM’s available Dallara DW12-Honda.

“Those four are on the list, and we’d really like to run any of those people,” Schmidt told RACER.

Among the four options, Bell has the most experience with the team, having raced for SPM at Indy from 2010-2012 with a best finish of ninth. The Grace team, owned by Beth Paretta, has Katherine Legge as its driver for the 500, and from her two starts at the 500, the most recent came in a last-minute deal with SPM in 2013 where she qualified 33rd and placed 26th. Grace is also known to be in discussion with other teams about partnering for the 500.

Chaves, who was unexpectedly released by Bryan Herta Autosport weeks before the season opener at St Petersburg, has targeted a return for the Indy 500 where he started 26th and finished 16th – on the heels of defending race winner Ryan Hunter-Reay – on his debut last year. The Colombian-American driver stood in for SPM’s Mikhail Aleshin during pre-season testing and earned rave reviews from the team for his immediate pace and chassis feedback.

With the allure of the 100th Indy 500 in mind, more first-timers like Vickers could try to make the race, although according to Schmidt, running a driver with no recent open-wheel experience on the sport’s biggest stage could be a stumbling block.

“I’d think Brian is the least likely only because he hasn’t done it before and we’re unsure if he’ll still be driving for Tony [Stewart], so with that unknown, it’s hard to figure out the costs and the logistics,” Schmidt said. “Granted, he’s very experienced and very mature, so I’m sure he’d get the job done, but I’m not sure we need any distractions with a rookie. He’s an option, though, and we aren’t ruling him out. I know how badly he wants to be in the race. We’re still trying to find money for all of them, they’re all trying to find money, but it’s not completely there.”

Whoever reaches the funding finish line will partner with full-time SPM drivers James Hinchcliffe and Aleshin. Schmidt expects to have a deal done before the month of May arrives, but doubts it will happen in a timely manner.

“We’ve been working on all three cars and think we have a good program, but we can’t do [the third car] for free,” he said. “We don’t have any internal sponsorship, and I find it amazing that it’s the 100th running of the Indy 500 and nobody seems to have all the money they need. It’s frustrating.”

It is just about two months til the green flag drops for the 100th running of the Indy 500.  This last domino in the Indy 500 seat puzzle will be interesting to see where it falls and fits in!