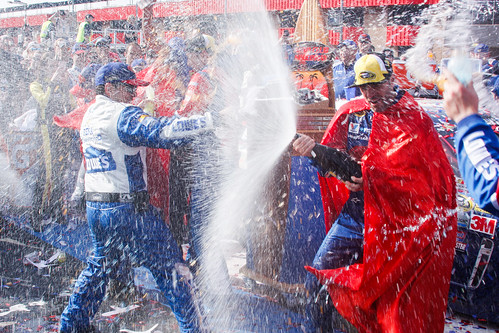 (photo courtesy miles elliott)
There is an old Jim Croce song with the lyrics that goes like this:

You don’t tug on superman’s cape
You don’t spit into the wind
You don’t pull the mask off that old lone ranger
And you don’t mess around with Jim (Jimmie Johnson)!!

Jimmie Johnson, with his Superman paint scheme on his No. 48 Chevy, won the battle between hometown heroes on Sunday, outdueling Kevin Harvick in overtime at Auto Club Speedway.

“Awesome teamwork, boys!” Johnson shouted on his radio after taking the 77th checkered flag of his NASCAR Sprint Cup Series career, breaking a tie with the late Dale Earnhardt, Sr. for seventh on the all-time victory list. “There’s nothing like winning at home.”

The six-time series champion from El Cajon, California, got the chance he needed when Kyle Busch blew a tire and hit the Turn 3 wall on Lap 198 of a scheduled 200 to cause the sixth and final caution of the afternoon. With the race destined for overtime, the lead-lap cars came to pit road for new tires, with Denny Hamlin leading Harvick and Johnson back onto the track.

Hamlin chose the outside lane for a restart on Lap 204, leaving Johnson behind Harvick in the inside lane. Johnson pushed Harvick clear of Hamlin into Turn 1 and dived to the inside of the race’s dominant driver, who had led 142 laps to that point.

Johnson stayed in the gas off Turn 2, ultimately clearing Harvick and pulling away to win by .772 seconds. The victory was Johnson’s second of the 2016 season and his sixth in 22 starts at the 2-mile track.

“I got a great run off of Turn 2, and I thought ‘Man I’ve got a shot at this thing,'” Johnson said of the opening lap of the final restart. “Which I didn’t expect to have. Harvick has been so fast. I cleared him and kind of got away.

“We saved our best for last, for sure. I told everybody Superman kicked Batman’s butt and it happened (teammate Dale Earnhardt Jr. was driving the Batman car and finished 11th).”

Driving a No. 48 Hendrick Motorsports Chevrolet adorned with a “Superman” logo to plug the movie “Batman v. Superman: Dawn of Justice,” Johnson led 25 laps, but his rival from Bakersfield had dominated the event until the final restart.

“That sucks,” said Harvick, who has finished second 20 times in 77 events since joining Stewart-Haas Racing in 2014, his championship season. “Just way too tight right there. Couldn’t put the throttle down. Wouldn’t turn.”

Harvick described the late-race caution as a worst-case scenario.

“We weren’t very good on restarts for four or five laps, unless we were all by ourselves,” said Harvick, who nevertheless retained the series lead by 11 points over Johnson. “The No. 48 was able to hang with us, and we just weren’t able to drive it in like I needed to, just didn’t have the front tires turning and the back wouldn’t grip.

All in all, both the NXS and the Sprint Cup races was a great show for the spectators and the TV fans alike! The next stop on the Sprint Cup circuit will be in two weeks at the paperclip, Martinsville!