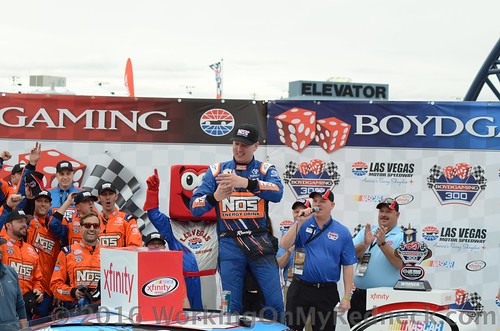 NASCAR heads into its first weekend off this season hoping fans are thrilled with the improved on-track product and exciting race finishes.

The racing over the first five events of the season has been better, and since Denny Hamlin’s victory by mere inches in the Daytona 500, there have been some excellent races to the checkered flag!

Nevertheless, it doesn’t translate into a buzz capable of carrying NASCAR into mainstream conversation every week.

If that is the truth then what does carry the conversation into the mainstream conversation?  These days the answer to that question is very simple!

However a new behavioral policy could curb much of the excitement that comes with the Sunday controversies.

Kyle Busch had “a chapped butt” with NASCAR for failing to call a caution when his tire failed on the last lap while leading the Xfinity Series race on Saturday. Austin Dillon passed Busch on the last corner to win, Busch finished second and sarcastically thanked NASCAR over his in-car radio for “fixing races”.

Under a behavioral policy announced days before the season-opening Daytona 500, Busch could be subject to a fine between $10,000 and $50,000 for his tirade and his “disparaging the sport and/or NASCAR’s leadership.”  That sounds like a lot of money to most of us who may not make $50,000 in one year, but to drivers who makes several millions per year like Kyle Busch that is merely a drop in the overflowing payday bucket!

Busch could also be penalized for skipping his post-race media obligations as the second-place finisher. Strangely, though, Kevin Harvick was told by NASCAR he wasn’t needed for a news conference after he finished second in the Sprint Cup race on Sunday, but Harvick isn’t under any scrutiny.

NASCAR executive Steve O’Donnell told SiriusXM NASCAR Radio after California the series was “disappointed” by both Busch’s comments and for failing to complete his media obligations.

Also under review this week, according to O’Donnell, is a tweet sent out by Martin Truex Jr.’s crew chief after Sunday’s race. Cole Pearn was upset with contact between Truex and Joey Logano, and he posted a derogatory tweet toward Logano.

Pearn issued an apology through his race team several hours later, but is still under review by NASCAR.

“We certainly want to be liberal in terms of allowing drivers and competitors to express their opinions, but there’s absolutely a line,” O’Donnell said. “That’s another one we’ll have to take a look at.”

Lastly, NASCAR is reviewing Danica Patrick walking toward the track to gesture at Kasey Kahne after Kahne caused her to crash.

If NASCAR does indeed punish anyone this week, it should be Patrick, who broke a clearly defined rule that has been in place since 2014. The rule was put into place after Tony Stewart’s car struck and killed a sprint car driver, Kevin Ward, Jr., who had exited his vehicle to confront the NASCAR driver on the track.

So Patrick actually did break a rule. The rest of it could be open for discussion.

As the reigning Sprint Cup champion — and a driver who has made considerable gains in terms of maturity and personal growth — Busch should probably hold himself to a higher standard of professionalism. But Busch has never been one to bite his tongue, and his negative comments toward NASCAR over his team radio are not totally uncommon.

He indicated on Twitter he expects a fine, and said skipping all post-race interviews Saturday will likely get him “a discount” on the sanction. In other words, he said nothing rather than dig a deeper hole.

But if NASCAR excused Harvick from post-race obligations a day later, it’s hard to justify Busch for failing to give any interviews. Drivers either have to speak to the media or they don’t. There shouldn’t be exceptions to who is and is not expected to meet media obligations.

And as for Pearn’s tweet, well, that’s the kind of stuff fans talk about. They won’t spend the next week discussing the passes of drivers racing inside the top 10. But they will remember Pearn took a public shot at Logano, and that Busch is mad at NASCAR, and that Patrick is mad at Kahne, and that NASCAR my reprimand those involved.

Trying to stifle the personalities and raw emotion from competitors is going to hurt NASCAR in the long run. NASCAR really thrives on having some kind of rivalries, driver vs. driver or manufacturer against manufacturer at the race track.  The sport is fortunate right now that its 2016 rules package has been embraced by drivers and indeed has made the racing closer, racier, exciting and much more watchable!

But for 38 events over nearly 10 months, the racing alone is not going to carry the sport. NASCAR desperately needs its personalities, its drama, its feuds,  a few punches thrown at opportune times in order to build any sort of sustainable momentum.

Without the drama that comes when 40 drivers bump, bang and lean on each other week in and week out, get underneath each other’s skin and generally just annoy the hell out of each other, it’s just cars going in circles, for three to four hours, to quote some of the non race fans in this world!