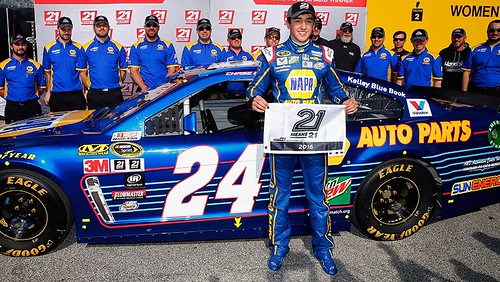 Nascar Sprint Cup Series Rookie #24 Chase Elliott has become the youngest driver in history to win the Pole Award for the Daytona 500 at the Daytona International Speedway.

Elliott, who took over the driving duties for the retired Jeff Gordon in the Hendrick Motorsports No. 24, turned a second round lap of 196.314 mph to earn the top spot in next Sunday’s Great American Race at Daytona.

Chase solidified his name in the NSCS record book as the youngest driver to win a pole for the Daytona 500 at 20 years, 2 months and 17 days. He also became the sixth rookie to win the pole award, and 9th driver to ever score his first NSCS pole award at Daytona.

With this pole win it marks back to back front row starts for the iconic #24 at Daytona.

“This is a very, very cool day,” Elliott said. “I don’t know that this opportunity has sunk in yet, much less sitting on the pole for the Daytona 500. I think the big thing is just the team and the Daytona 500 qualifying is about the team guys and the effort they put into these cars and it’s nothing special I did, it’s really what kind of work they did this off-season to make it happen.”

Joe Gibbs Racing driver #20 Matt Kenseth will start outside the front row after his lap of 196.036 mph.

“Never qualified in front row here before, so that certainly takes off some pressure for later in the week,” Kenseth said.

Blaney and Matt DiBenedetto, with the Wood Brothers and BK Racing teams without the new Sprint Cup Charter and who had to earn a berth in the Daytona 500, secured starting spots on Sunday.

Thursday’s Can-Am Duel qualifying races will determine the other two open spots in the 500 as well as set the line-up behind the front row of Chase Elliott and Matt Kenseth.