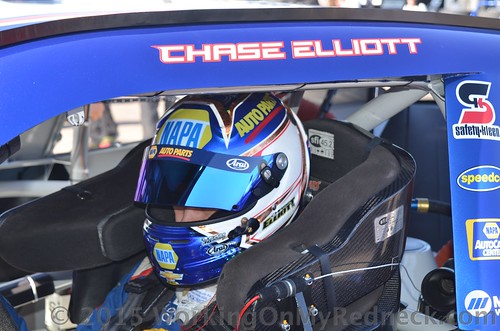 For 22 years the saga of the Hendrick Motorsports #24 Chevy was driven and controlled by the young kid from Valllejo, CA, Jeff Gordon.

However, at the end of 2016 Gordon hung his helmet up, moved on up to the broadcast booth for FOX Sports1, and William Clyde Elliott, Jr. from Dawsonville, GA, better known as Chase Elliott, son of “Awesome Bill from Dawsonville”, moved into the driver of the HMS #24 Chevy.  It has been quite obvious that Mr. Hendrick has been grooming Elliott to take Gordon’s seat in his flagship #24 Chevy for quite some time.

Today the 2016 Rookie of the Year candidate won the pole for next Sunday’s Daytona 500, putting the No. 24 Hendrick Motorsports Chevrolet in the top starting spot in NASCAR’s biggest race for the second year in a row. If you remember, last year Jeff Gordon won the pole in his “farewell tour”.

Bill Elliott, Chase’s father and a NASCAR Hall of Fame member, set the three fastest Daytona 500 pole speeds in history and now Chase is a pole winner at Daytona, and adds to the family totals as well.

Elliott, who turned 20 last November, became the youngest pole winner in Daytona 500 history, as he turned a lap of 196.314 miles per hour around the 2.5-mile superspeedway.

“This is a very, very cool way to start the 2016 season with Hendrick Motorsports,” said Elliott.

“We had a lot of speed in all our Toyotas,” said Kenseth, who qualified on the front row for the Daytona 500 for the first time. “Really looking forward to Sunday.”

Sunday’s qualifying session locked in only the front row for next Sunday’s big race. Starting positions 3-40 will be determined in Thursday night’s Can-Am Duel qualifying races at Daytona.

If there is any question about Chase Elliott’s ability to deal with all the pressure that comes with being the son of a very famous NASCAR driver, or his ability to handle or deal with all the additional pressure of stepping into the huge shoes of Jeff Gordon, then winning the pole for the Daytona 500 in his very first attempt should quell all those question marks!