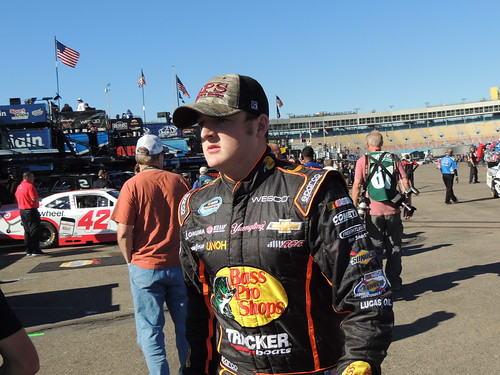 Rumors floating around the Sprint Cup garage at Daytona is that Ty Dillon is expected to drive the No. 14 car for Tony Stewart at Atlanta Motor Speedway, Phoenix International Raceway, Auto Club Speedway and Talladega Superspeedway.

However, nothing has been cast in stone at this point, and Stewart-Haas Racing is not expected to announce who will drive the car at Atlanta until the Wednesday after the Daytona 500.

In an interview Friday with NBC Sports, SHR executive vice president Brett Frood said the situation is fluid but indicated the team thinks highly of Dillon, who has strong ties to Bass Pro Shops, also a sponsor of Stewart and SHR.

Brian Vickers drove the car in Saturday night’s Sprint Unlimited and will drive it in the Daytona 500, as Stewart continues to recover from a burst fracture of the L1 vertebra he suffered in an ATV accident Jan. 31 out in the sand dunes near Glamis, CA. There still is no timetable given for Stewart’s return.

Dillon is expected to drive the races with Bass Pro sponsorship of the No. 14 car. Bass Pro, which has backed Dillon for years. Pro Bass is scheduled to be a co-primary sponsor with Mobil 1 for the Feb. 28 race at Atlanta, the March 13 race at Phoenix and the March 20 race at Auto Club Speedway. Additionally, Bass Pro is scheduled to be the car’s primary sponsor for the May 1 race at Talladega.

Dillon will race in the Daytona 500 for Circle Sport-Leavine Family Racing. That is a ride that he’s sharing with Michael McDowell, and is scheduled for five races this season. His next start for that team is expected to be April 9 at Texas Motor Speedway.

It is quite interesting that SHR has continued to play their cards extremely close to the vest regarding Stewart’s injuries and the replacement driver(s).  By doing so it could indicate several things.  One train of thought is that Stewart may not be able to return to drive for SHR this year because of the seriousness of that injury.  Still another thought is that the unseen negotiations could be very complicated, and therefore both sides must proceed carefully before the contract can be ratified!

Nevertheless, stay tuned because this story still has more chapters to be written before we can read the climatic conclusion!