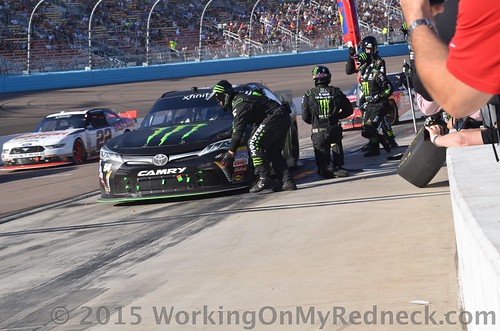 Kyle Busch announced today that he is still working through his NASCAR XFINITY Series schedule for 2016, however, he knows restrictor-plate tracks are completely off the table.

Busch, the defending NASCAR Sprint Cup Series champion, is the XFINITY Series win leader with 76 career victories, and he also has 44 wins in the NASCAR Camping World Truck Series. But in 2015, Busch suffered a broken right leg and shattered left foot in the season-opening XFINITY Series race at Daytona International Speedway.

Those injuries kept him sidelined for months, and forced him to miss the first 11 races of the Sprint Cup Series season. Tuesday, on the opening day of the Charlotte Motor Speedway Media Tour, Busch said he hopes to run between 15 to 18 races in the XFINITY Series.

“No restrictor-plate races, I’m out of that stuff,” Rowdy  said. “No more plate races because my wife won’t let me. And (team owner) Joe (Gibbs), Joe and Samantha have made that decision. I was thinking about it but they were like no.”

So sports fans, the days of seeing KyBu double and triple dipping on race weekends are rapidly coming to an end!