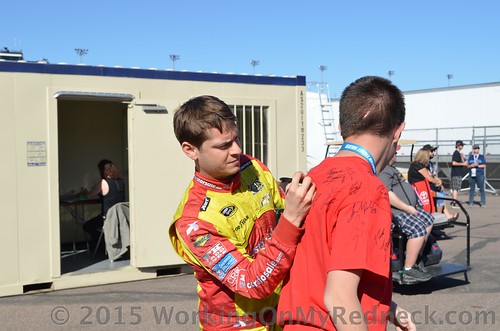 Landon Cassill will join the Front Row Motorsports line-up to drive the #38 Ford for the 2016 season.

The 26-year-old Cassill has 187 Sprint Cup starts under his belt, most recently competing for Hillman Racing in 2015. The Cedar Rapids, Iowa, native has raced in all three of NASCAR’s national series, earning XFINITY Series Rookie of the Year honors in 2008.

“I feel like Front Row Motorsports is a great fit for me,” Cassill said. “I’ve got several years of experience in the series now, and being a part of this team will help me take the next step in my career. I’m grateful to Bob Jenkins and Ford Motor Company for the opportunity and can’t wait to get in the car.”

Cassill’s Sprint Cup career-best finish is a fourth-place run at Talladega Superspeedway (2014), a track where Front Row Motorsports has also excelled. “We’ve always been impressed with Landon and what he can do behind the wheel,” said team owner Bob Jenkins. “He’s got a lot of natural talent. You could see that at every level of racing he’s competed in throughout his career. We’re happy to have that talent in one of our race cars this year.”

Sponsorship programs for the #38 team will be announced soon.

For Cassill this is a step up from his ride in 2015.  Now that Front Row Motorsports has signed a deal with Roush Fenway Racing for a technical alliance it can only make FRM much more competitive than it has been in the past few years.