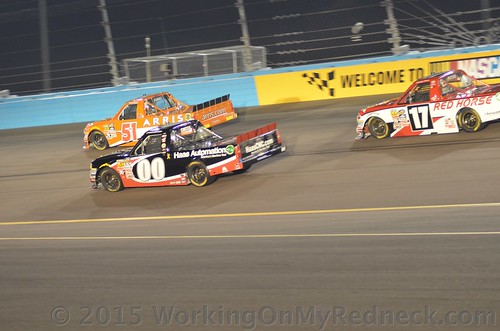 NASCAR has announced a huge change to the Camping World Truck Series beginning at Daytona next month!

The NASCAR Camping World Truck Series races now will feature a Caution Clock, which will be triggered at the start of each green-flag run. When the green flag is displayed, 20 minutes will be placed on the clock. If/when the clock expires, a caution will be thrown.

“These innovations contain the elements of racing that our fans want the most,” said NASCAR Executive Vice President and Chief Racing Development Officer Steve O’Donnell. “The enhancements put a premium on in-race strategy, and will create an unprecedented level of excitement as teams make tactical decisions that could impact their spot in the Chase.”

The Caution Clock that will be utilized in each NASCAR Camping World Truck Series event (except for Eldora Speedway) will be set to 20 minutes and triggered at the start of each green-flag run during race events. When the clock counts down to zero, a caution flag then will be displayed and no beneficiary will be awarded. A caution occurring before time expires resets the clock when the subsequent green flag is displayed and the first truck a lap down will be the beneficiary.

The addition of the Caution Clock marks a whole new dimension to this series.  This will eliminate setting up the truck for “long runs”.  Instead the race setup will be for racing only 20 minutes at a time.  I am not sure that I, nor the average race fan, will embrace this new concept of truck racing!