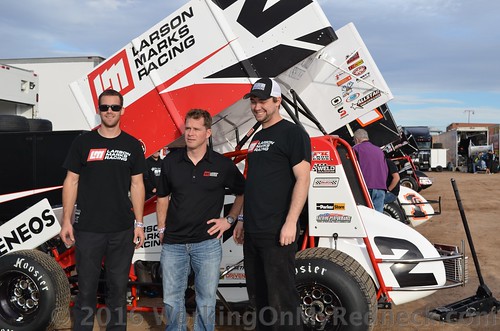 While the temperature might say it is winter in Arizona, Shane Stewart is hotter than than the Georgia asphalt in July!  He became the first back-to-back feature winner in the short Winter Heat Sprint Car Showdown history on Friday at Cocopah Speedway.

Stewart passed defending event champion Danny “The Dude” Lasoski for the lead in turns three and four with five laps remaining to claim the $12,000 top prize as well as the lead in the championship standings heading into Saturday’s event finale.

“I told myself to be patient getting into (turn) three because that was where I was going to pass him,” said Stewart, who has earned three straight top-two finishes at the marquee event. “He was a little bit better than I was in (turns) one and two. I just needed him to get bottled up behind a lapped car, which is kind of what happened. We were able to get a good run going into (turn) three and get by him coming off of (turn) four.”

The 30-lap feature began with a caution on the opening lap for D.J. Netto, who broke a front end and spun into the infield. Lasoski, who garnered the pole position after earning the most combined points during heat race and qualifier competition, rocketed into the lead on the complete restart and he built a sizeable advantage by the time he entered traffic on Lap 8.

Stewart powered into fourth place on that lap and into third on Lap 12. He drove into the runner-up position on Lap 13 and began to reel in The Dude, who owned nearly a straightaway advantage. While Lasoski and most of the drivers favored the bottom lane, Stewart ventured to the top groove, where he could drive it deep and gas it up, all the while reeling in Lasoski, who struggled for several circuits to lap Tasker Phillips.

Lasoski and Stewart were nose to tail on Lap 19, however it took several laps for Stewart’s top shelf to propel him into the lead. With five laps remaining Stewart made the race-winning pass by driving his car really deep into turn three, getting back to the gas quickly, and driving right around Lasoski in turn four.

“We plain and simple got beat,” Lasoski said. “That No. 2 car has been rolling all week and they just caught me in lapped traffic. I couldn’t get by a lapped car and he did what he had to do. He drove by me.”

The final caution came with four laps remaining as Bud Kaeding, who has had rotten luck all week, stopped in turn three when he blew a right rear tire that damaged the right part of his wing. Stewart got a clean restart and sailed like a cruise ship to his second triumph in the past three nights.

“We have a great race car,” he said. “We’ve got a great team. It’s just a pleasure to drive this thing. You just can’t ever count us out. For us to pass the teams that we did and the drivers that we did and pick up another win is really special for me, special for my guys and makes all their hard work worth all the effort.”

Dale Blaney, who ranks second in the event standings – 18 points behind Stewart – rounded out the podium after maneuvering from fifth to third place on the frontstretch with 10 laps remaining.

“You could move around a little bit,” he said. “I looked up and there set Shane and there set Danny right in front of me. We were pretty good. We weren’t balanced the best. To come out of here with a third is awesome.”