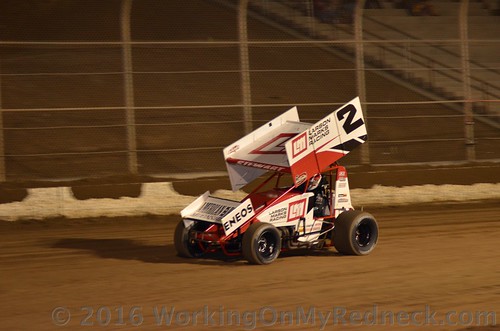 After racing sprint cars for several years, Shane Stewart struck up a deal with rising NASCAR, Kyle Larson, and ran a partial World of Outlaws schedule in 2014.  In 2015 the Larson Marks Motorsports sprint car team won several features on the WoO tour.  Now with three of the five races compete in The Winter Heat Sprint Car Showdown suddenly Stewart has become a hot commodity!

Not that he hasn’t had a sizzling sprint car racing career already, but the driver from Indy is now the talk of the 2016 Winter Heat Sprint Car Showdown at Cocopah Speedway.

“If there was one driver I’d pick right now to be the first to win two feature events in the same show, it would be him. And I’d say he’s a pretty good bet to win the series championship, too.”

In the inaugural 2015 Winter Heat there were five different feature event winners, and so far in 2016, there have been three different winners. The second night’s winner, however, NASCAR Sprint Cup Series driver Kyle Larson, did become the first repeat winner, having also won a feature event in 2015.  Absent the fact that Larson hit a rut and temporarily had to get off of the loud pedal, and Stewart zipped by him, Larson would have won two straight races in this series.

“We talked earlier about who might win two feature events this year, and I really didn’t think there was anyone who could do it, the field is that strong,” continued Burgess. “But after what I saw last night (Wednesday), Shane has changed my mind.”

Stewart, driving a Larson Marks Racing entry in the Winter Heat, battled his boss, Larson, for the win in the 30-lap feature Wednesday night. Larson, starting on the pole, jumped out to the lead with Stewart, starting alongside on the front row, in hot pursuit.

Larson then led the race for 25 laps before Stewart made an outside pass in Turns 1 and 2 on the 26th lap to get past Larson and take the win. At the exit to Turn 2, Larson, who was running an uncharacteristic middle groove, hit a hole in the racing surface, bobbled, and nearly crashed. But he saved the car and still went on to finish second.

“Thankfully we still finished second,” said Larson. “I all but spun out or turned over off (Turn 2) there. I was pointed at the field and could see Tasker Phillips coming at me. I must have missed him by a foot. (I’m) just disappointed.”

Larson was making his own bid to be the first repeat winner in the 2016 Winter Heat, and the only driver to have won three feature events in the first two Winter Heats, but came up short.

Stewart was asked afterward if he had not driven his hardest on Saturday night, when he finished second and Larson was the winner.

He said that was definitely not the case. His win made his point.

When the race was over, Larson and Stewart had lapped almost the entire field, they were just that dominate. Larson actually started putting other cars a lap down on the third lap, and at the checkered flag, Stewart had lapped everyone up to eighth place!

Along with getting his first Winter Heat feature event win, Stewart, who has won the the 360 Knoxville Nationals five times, is a two-time Lucas Oil American Sprint Car Series national champion, and finished second in the 2015 World of Outlaws series, also climbed into the No. 3 position in the 2016 Winter Heat series standings, one point behind Jason Solwold, from Burlington, Wash. The leader is Larson, but Larson has exited the Winter Heat for Daytona and Roar Before the Rolex 24 testing and practice, and will not return to Yuma.

Tonight the track heats up again for round number four.  New to the competition for the final two races will be another NASCAR racer, Hendrick Motorsports driver Kasey Kahne.

Even though the outside air temperature will only be in the low 50’s at race time and decreasing, the competition at Cocopah Speedway will be smoking hot!

One Comment on “Shane Stewart Is Hotter Than The Georgia Asphalt”